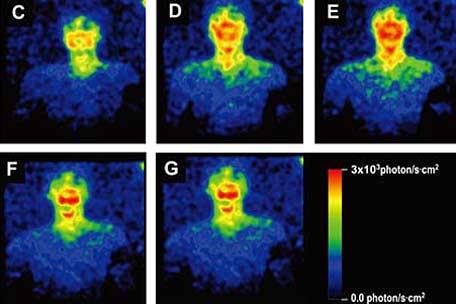 That’s right.  Our bodies actually emit a minuscule amount of real light.  This is not just radiation or infrared body heat, but actual photons are released from the surface of the skin:

Past research has shown that the body emits visible light, 1,000 times less intense than the levels to which our naked eyes are sensitive. In fact, virtually all living creatures emit very weak light, which is thought to be a byproduct of biochemical reactions involving free radicals. ((“Humans Glow in Visible Light,” Charles Q. Choi, LiveScience. http://news.aol.com/article/humans-glow/584160))

New research indicates that the amount of light varies throughout the day:

The researchers found the body glow rose and fell over the day, with its lowest point at 10 a.m. and its peak at 4 p.m., dropping gradually after that. These findings suggest there is light emission linked to our body clocks, most likely due to how our metabolic rhythms fluctuate over the course of the day. ((ibid.))

The face glows more than the rest of the body, but research is showing that this light may be indicative of the condition of the whole body:

“If you can see the glimmer from the body’s surface, you could see the whole body condition,” said researcher Masaki Kobayashi, a biomedical photonics specialist at the Tohoku Institute of Technology in Sendai, Japan. ((ibid.))

And it is not just humans that exhibit this quality, but all living things emit low levels of actual light.

This research brings new meaning to many scriptures which deal with light, particularly section 88 of the Doctrine & Covenants:

11 And the light which shineth, which giveth you light, is through him who enlighteneth your eyes, which is the same light that quickeneth your understandings;
12 Which light proceedeth forth from the presence of God to fill the immensity of space—
13 The light which is in all things, which giveth life to all things, which is the law by which all things are governed, even the power of God who sitteth upon his throne, who is in the bosom of eternity, who is in the midst of all things. (D&C 88:11-13)

49 The light shineth in darkness, and the darkness comprehendeth it not; nevertheless, the day shall come when you shall comprehend even God, being quickened in him and by him.
50 Then shall ye know that ye have seen me, that I am, and that I am the true light that is in you, and that you are in me; otherwise ye could not abound. (D&C 88:49-50)

58 And thus they all received the light of the countenance of their lord, every man in his hour, and in his time, and in his season— (D&C 88:58)

It would be very interesting to see further research that tests if the light that is emitted varies not only by metabolic rhythms, but according to the character and lifestyle of each person.  Furthermore, is it possible that we can detect this light from each other, even if not with our eyes?  Hugh Nibley once wrote of the discernment abilities of Brigham Young:

A big black leather chair stood in Brigham Young’s office by the Lion House; it faced the window on the opposite wall and the President’s desk in the middle of the room. First-time visitors to the office were invited to sit on that chair, facing the strong light of day and the calm blue eyes of Brother Brigham, who sat there at his desk, his back to the window, quietly waiting for his guest to say something. After all, the man had come to see him, and it was only right to let him state his business. President Young, according to Grandfather [Charles W. Nibley], would never say a word for the first three minutes. And at the end of those first three minutes he always knew exactly the sort of man he was dealing with, and the nature—greedy, benign, or sinister—of his business. “And he never (here Grandpa smote the arm of his chair) had to change his mind!”—his psychoanalytical techniques, black leather couch and all, were deadly accurate. Brigham Young used to say that no man, if allowed to speak, could possibly avoid revealing his true character. ((Hugh W. Nibley, “Educating the Saints—a Brigham Young Mosaic,” BYU Studies 11/1 (1970): 61.))