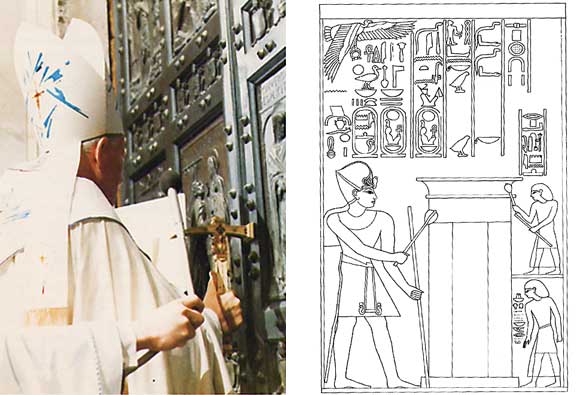 Matthew B. Brown explains this practice in the Roman Catholic tradition as seen in the photo on the left:

On Jubilee years [every 25 years], the Pope carries out a . . . rite when he knocks three times with a golden hammer on the Holy Door, or Holy Gate, of St. Peter’s Basilica in Rome (several other basilicas in Rome also have Holy Doors). A medieval medal struck to commemorate this occasion shows the people on one side of the door and the Lord on the other side . . . The words spoken along with this rite make it clear that the ceremony represents entry into God’s temple . . . [the image on the left is] this rite being performed, see Francesco Papafava, ed., The Vatican (New York: Harper and Row, 1984), 19. The tradition of the Holy Door is also found in the Russian Orthodox Church. These Christians view this door as “The entrance into the Holy of Holies—the Sanctuary; only the clergy may enter through it, and only at definite moments.” (The Gate of Heaven, 105)

Some notes from the Vatican for the occasion of the Jubilee of the year 2000 call the the “opening of the Holy Door” a rite, a ritual, a sign, and a mystery. Since the initiation of this rite in the fifteenth century, the pope used a hammer to strike the wall covering the Holy Door, always with three strikes. Originally the hammer was a mason’s hammer, but later was made into a work of art—of gold, silver, and an ivory handle (as seen in the image above). In 1975, the wall that was originally on the outside of the door was rebuilt on the inside, presumably because of the falling pieces of cement that nearly hit Pope Paul VI when the door was opened in 1974, as can be seen in a short portion of this video. In 2000, the hammer was not deemed necessary anymore since there was “no longer a wall to be removed but only a door to be opened.” Apparently the hammer was viewed in association with removing the wall and not knocking on the door, although this interpretation is doubtful from the above image where Pope John Paul II is striking the door directly with the hammer, and there is no wall. Although this detail was seemingly planned for removal, it appears that the hammer was, indeed, still used in the 2000 event, as can be seen in the photograph.

In 2000, the rite was to proceed following this plan. The pope approaches the door and in Latin sings, “This gate of the Lord”, with all responding “into which the righteous shall enter” (Ps. 117:20). The pope continues, “I will come into thy house Lord”, with all responding “I will worship towards thy holy temple” (Ps. 5:7). The pope concludes, “Open to me the gates of righteousness,” with all responding “I will go into them, and I will praise the Lord” (Ps. 118:19). After the hammer strikes (which were not originally planned for the 2000 event), the door is opened, the pope enters, and the interior of the Basilica is fully illuminated.

Pope John Paul II wrote in his Bull of Indiction of the Great Jubilee of the Year 2000 about the symbolism behind this rite which he called the “sign of the holy door”:

It evokes the passage from sin to grace which every Christian is called to accomplish. Jesus said: “I am the door” (Jn 10:7), in order to make it clear that no one can come to the Father except through him . . . There is only one way that opens wide the entrance into the life of communion with God: this is Jesus, the one and absolute way to salvation. To him alone can the words of the Psalmist be applied in full truth: “This is the door of the Lord where the just may enter” (Ps 118:20).

To focus upon the door is to recall the responsibility of every believer to cross its threshold. To pass through that door means to confess that Jesus Christ is Lord; it is to strengthen faith in him in order to live the new life which he has given us. It is a decision which presumes freedom to choose and also the courage to leave something behind, in the knowledge that what is gained is divine life (cf. Mt 13:44-46) . . . In this way we see how rich in meaning are the words of the Apostle Peter when he writes that, united to Christ, we too are built, like living stones, “into a spiritual house, to be a holy priesthood, to offer spiritual sacrifices acceptable to God” (1 Pt 2:5).

A similar form of this practice can be seen in other cultures and times. The Egyptians practiced something very akin to the Catholics and Eastern Orthodox. Dr. Hugh Nibley calls to our attention:

When the king enters the sanctuary for the first time, at the completion of the temple, he performs an act exactly resembling what is done at the door of the church at Easter in the Eastern Orthodox rites, namely, he knocks three times on the door with his white mace, enters, illuminates the shrine with sacred fire, and performs a series of lustrations and circumambulations. (The Message of the Joseph Smith Papyri: An Egyptian Endowment, 448)

In the Egyptian image on the right we see this occurring as:

Amenhotep III strikes the doorpost of one of sixteen city gates with his white-headed mace; the privilege is also extended to his vizier . . . Reconstructed from drawings and photographs of the temple at Soleb, Nubia, ca. 1360 B.C. (ibid., 272)

Since it is clear that the door was seen an entryway into the presence of God, and thus the illumination, could not the knocking on the door be just what it appears to be, calling the attention of the occupant on the inside? As Cassuto notes, “it is unseemly to enter the royal palace suddenly; propriety demands that the entry should be preceded by an announcement” (A Commentary on the Book of Exodus, 383, quoted in Matthew B. Brown, The Gate of Heaven, 105).

Update (1/25/08): See a later post with a video of a matriculation ceremony from the beginning of the movie Mona Lisa Smile, with the same familiar symbolism of 3-4 knocks on the “holy” door.