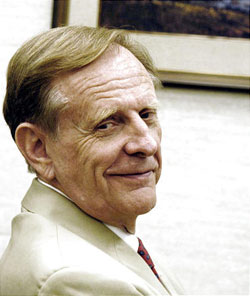 I don’t think Dr. Bushman was recommending the temple be as secret as it has come to be in the Church, but was making an observation of the standing custom among Latter-day Saints of remaining quite silent about the temple when outside of that sacred space. We even go far as to not discuss it even while sitting in the celestial room.

As I have written in the past, I believe that many members of the Church take the sacred secrecy of the temple to extremes that are not necessary, and which actually disregards Joseph Smith’s admonition to “search deeper and deeper the mysteries of godliness” ((History of the Church, 6:363)). If the temple were as secret as the prevailing custom of the Church claims it to be, we would not have the mountain of books, General Conference talks, articles and commentary that have been written by apostles, prophets, other General Authorities, and the best of LDS scholars, on the subject, many through the indispensable work of FARMS at BYU, now part of The Neal A Maxwell Institute for Religious Scholarship.

Clearly there are many aspects of the temple that we do not talk about outside the temple—we do not share the specific language of the ceremonies casually, talk in detail directly about the ritual, or describe the sacred clothing directly. These are sacred subjects, and requires caution in speaking of them. But much has been written on the subject of temples, most recently Temple Worship, a book I’ve been wanting to pick up by BYU’s Dr. Andrew Skinner.

The the real question and dichotomy becomes, where are the lines drawn? How should the temple be spoken of? What is the right and correct way to discuss it, share it, and study it? How do we speak of it with friends and others not of our faith? How is the “cult” stigma of the temple assuaged by scholarly work? Instead of sealed lips, how do we go about researching and talking about the temple, the pinnacle and most sublime aspect of our worship?

This has been a question of mine for years, but I believe I’ve begun to nail it down. Hugh Nibley began a precedent, or at least established a more firm footing, which I believe has been followed by other scholars, and even by General Authorities, of discussing the deeper and more detailed aspects of temple worship in an indirect way. Ancient practices, customs, texts, and non-LDS scholars’ work can be studied in relationship to ritual subjects, without as much preoccupation of stepping across certain boundaries. Discussing how the early Christians interpreted and practiced ritual worship, for instance, is mostly ok. Making direct comparisons between those practices and our modern-day temple is mostly off limits. The reader is left to their own interpretations in drawing parallels between the two, which endowed members of the Church do quite easily, but which leaves others who are not acquainted with LDS temple practice somewhat puzzled other than us stating to them, “Our practice is similar to theirs and therefore has precedence in antiquity,” or in other words, “Joseph didn’t make it up; these things have been revealed by God in the past.” It is a matter of analyzing only that which is presented from factual evidence obtained by a historical study of the ancients, while staying silent on the presently revealed forms. But as I’ve mentioned before, there still is much we can learn from others about our own traditions, and how the temple ordinances have been revealed in former dispensations sheds significant light on their current practice.

What Have the Brethren Said?

I’ve been trying to get a copy of a talk by Elder Oaks on the subject, entitled “The Temple Ceremonies,” that Boyd Petersen mentioned in his biography of Hugh Nibley, and in which Elder Oaks discusses the limits in a specific way and includes quotes by Nibley and other apostles. Unfortunately, it was given at a general leadership meeting and is therefore not widely available. A publication of this sort would help define the lines of propriety, and open up appropriate discussion and study among the Saints. In the meantime, studying respected and trusted authorities on the subject is the best guide for knowing how the temple can and should be spoken of.

Update 3/15/08:  A transcription of Dr. Bushman’s talk has been made available at the Juvenile Instructor.  It is an excellent analysis of America’s stance on Mormonism today, and the prospects of the future.