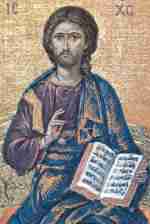 So why do we use an example of a practice among a “heretical” group of Christians? Dr. John A. Tvedtnes has taught,

Latter-day Saints, believing that the great apostasy was already well under way by Marcion’s time and that no Christian group then possessed the full truth, see the practice as a remnant of an earlier rite dating from the time of the apostles. ((Tvedtnes, “Baptism for the Dead in Early Christianity,” The Temple in Time and Eternity, <http://farms.byu.edu/publications/bookschapter.php?bookid=&chapid=104>.))

The clearest description of the practice among the Marcionites comes from St. John Chrysostom (347-407), an early father of the church. He describes it as a proxy baptism, the Marcionites using as evidence 1 Cor. 15:29:

…when any Catechumen departs among them, having concealed the living man under the couch of the dead, they approach the corpse and talk with him, and ask him if he wishes to receive baptism; then when he makes no answer, he that is concealed underneath says in his stead that of course he should wish to be baptized; and so they baptize him instead of the departed… ((Chysostom, Homily 40 on First Corinthians, <http://www.newadvent.org/fathers/220140.htm>.))

St. Chrysostom goes on to condemn the practice, construing that Paul meant the living were being baptized with faith in the resurrection of the dead. It must be remembered he lived several centuries after the Savior, and the apostasy had already progressed substantially by that time. What this is evidence of, however, as are the following references, is that a large early Christian group in the second century firmly believed in vicarious baptism, practiced it extensively, and did so using the apostle Paul’s words to the Corinthians as positive support for the practice. This practice was so well known, several early theologians had to mention it, to condemn it.

Tertullian (160-225), another early church leader and Christian apologist, seems to have been confused himself as to the meaning of Paul’s words. This whole time period is marked by confusion as to the true doctrines and practices of Christianity. The Church of Rome itself was trying to figure it all out, hence the creeds which were established centuries later. In one instance Tertullian seems to use the practice of a proxy baptism, which he knew to exist among “some,” in support of a bodily resurrection:

For if as in Adam all die, even so in Christ shall all be made alive, their vivification in Christ must be in the flesh, since it is in the flesh that arises their death in Adam. But every man in his own order, because of course it will be also every man in his own body. For the order will be arranged severally, on account of the individual merits. Now, as the merits must be ascribed to the body, it must needs follow that the order also should be arranged in respect of the bodies, that it may be in relation to their merits. But inasmuch as some are also baptized for the dead, we will see whether there be a good reason for this. Now it is certain that they adopted this (practice) with such a presumption as made them suppose that the vicarious baptism (in question) would be beneficial to the flesh of another in anticipation of the resurrection; for unless it were a bodily resurrection, there would be no pledge secured by this process of a corporeal baptism. Why are they then baptized for the dead, he asks, unless the bodies rise again which are thus baptized? ((Tertullian, On the Resurrection of the Flesh 48, <http://www.newadvent.org/fathers/0316.htm>.))

In another text, Tertullian didn’t believe Paul meant vicarious baptism at all, but still with some uncertainty as to the nature of it, and the early Christian practice of it:

Epiphanius (315-403), another church father, likewise gives us evidence for the early Christian practice, even the “tradition,” of baptism for the dead, which he heard rumors of certain Christians practicing. But, in keeping with modus operandi, likewise deems the practice a misunderstanding of scripture:

For their school was at its very peak in this country, Asia, and in Galatia moreover. And in these localities I even heard a piece of tradition which said that when some of their people died early without baptism, others would be baptized for them, in their names, to keep them from being punished for rising unbaptized at the general resurrection, and becoming subject to the authority that made the world. And the tradition I heard says that this is why the holy apostle said, “If the dead rise not at all, why are they baptized for them?” But others explain the text well by saying that, so long as they are catechumens, the dying are allowed baptism before the end with this hope, to show that he who has died will also arise, and therefore needs the baptismal forgiveness of sins. ((Ephiphanius, Panarion 1.28.6, <http://books.google.com/books?id=s9-utOHPLfEC&printsec=frontcover&sig=a8WrgHdfrapJwHfKYENx25i3WBM&source=gbs_book_other_versions_r&cad=3_0#PPA110,M1>.))

What these examples show, is that there was a widespread and early practice of baptism for the dead in Christianity, believing that Paul’s words to the Corinthians was plain evidence for the practice, something that many critics are unwilling to admit, but which are attested to clearly by some of the earliest theologians of the time, whether they agreed with it or not. For all these learned ones to have thought there was an exigency to stand against it in their own time, the practice must have been more than an small aberration. If there were writings extant from these groups that practiced baptism for the dead, we might have a very different understanding today of the early practice. We tend to only be told one side of the story, the side that won the theological debate on the issue. But what if the wrong side won?

The Latter-day Saints today believe that baptism for the dead was a practice established by Christ after his resurrection, in beginning the great work of the redemption of the dead, the dead who did not have the chance to hear and accept the gospel in life, as Clement of Alexandria so eloquently explained. We believe that the rite was practiced by the apostles and the early Christians, but like other temple ordinances, was considered very sacred, and one of the mysteries, not to be divulged to everyone. Through apostasy, the practice gradually died out.