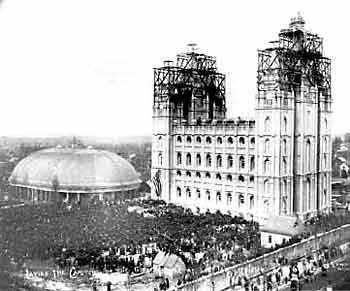 Between 30,000 and 50,000 people gathered to shout "Hosanna!" for the capstone-laying ceremony of the Salt Lake Temple in 1892. Photo by Charles Ellis Johnson.

This last Sunday as I participated in the Hosanna Shout at one of the dedication sessions of the Draper Utah Temple, I thought that it might be interesting to research this form of praise and worship, and how it’s been used in the past. During the services President Uchtdorf related some of the occasions on which this shout has been given, such as when Jesus rode into Jerusalem triumphantly (Matthew 21; Mark 11; John 12), or when Christ appeared to the people in the Americas in the Book of Mormon (3 Nephi 11). But when else has this shout been given, particularly in the latter days, and under what circumstances?

I found that Dr. Richard Holzapfel, a scholar at Brigham Young University, already has researched and wrote about this on the Religious Studies Center Blog yesterday.  Dr. Holzapfel notes that it was precisely 173 years ago today that the Kirtland temple was dedicated, and the Hosanna Shout was given.  The majority of his post deals with the shouts that were given in conjunction with the capstone-laying ceremony and formal dedication services of the Salt Lake Temple.  Of the capstone ceremony he writes:

President George Q. Cannon, a counselor in the First Presidency, said “that there may be no misunderstanding about the manner in which the shout of Hosanna should be given when the capstone should be laid, Pres. Lorenzo Snow would drill the congregation in the shout.” Then President Snow said, “This is no ordinary order, but is—and we wish it to be distinctly understood—a sacred shout, and employed only on extraordinary occasions like the one now before us.” He urged them with these words: “We wish the Saints to feel when they pronounce this shout that it comes from their hearts. Let your hearts be filled with thanksgiving,” adding, “Now when we go before the temple and this shout goes forth, we want every man and every woman to shout these words to the very extent of their voice, so that every house in this city may tremble, the people in every portion of this city hear it and it may reach to the eternal worlds.” He finally told the congregation that the sacred shout “was given in the heavens when ‘all the sons of God shouted for joy’ [Job 38:7].”

President Woodruff later told a congregation of Saints that “the Heavenly Host were in attendance at the [first] dedication [service] . . . and if the eyes of the congregation could be opened they would [have] seen Joseph and Hyrum [Smith], Brigham Young, John Taylor and all the good men who had lived in this dispensation assembled with us, as also Esaias, Jeremiah, and all the Holy Prophets and Apostles who had prophesied of the latter day work.” President Woodruff continued, “They were rejoicing with us in this building which had been accepted of the Lord and [when] the [Hosanna] shout had reached the throne of the Almighty,” they too had joined in the joyous shout.

I remember when President Hinckley said almost the same thing at the dedication of the Nauvoo Temple while I was on my mission in El Salvador.  He said that Joseph Smith and many of the early Saints and prophets were in attendance.  Surely they too joined in shouting Hosannas to God and the Lamb!