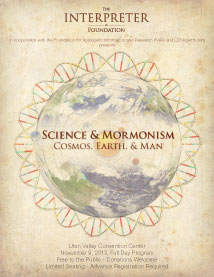 One of the criticisms often leveled at the Church and the restored gospel, and even more broadly at Christianity in general, is that it is “behind the times” with regards to science.  Critics point to past teachings that coincide with creation, evolution, genetics and DNA, archaeology, paleontology, geology, neurology, and other areas to show how “out of touch” and “out of date” the Church is in these areas.  These criticisms are even pointed toward teachings we find in the temple, particularly those regarding the creation of the Earth and of mankind.  Some have lost their faith over what they view as the “incompatibilities” of modern science and the gospel.  This need not be.

Elder James E. Talmage penned the following, which was included in part on his epitaph,

“Within the gospel of Jesus Christ there is room and place for every truth thus far learned by man or yet to be made known. The Gospel is not behind the times, on the contrary it is up-to-date and ever shall be.” (“The Earth and Man.”)

“‘Mormonism’ embraces all truth that is revealed and that is unrevealed, whether religious, political, scientific, or philosophical.” (JD 9:149.)

“In these respects we differ from the Christian world, for our religion will not clash with or contradict the facts of science in any particular.” (JD 14:116.)

“Since the Gospel embraces all truth, there can never be any genuine contradictions between true science and true religion…. I am obliged, as a Latter-day Saint, to believe whatever is true, regardless of the source.” (Faith of a Scientist, 12, 31)

At another time he said, paraphrasing his father,

Many more such quotes could be cited by both prophets and apostles, past and present.  True science is compatible with true religion, for truth is truth.

I’d like to take the opportunity to highlight and recommend what I think will be an historic and notable symposium where the truths of revealed religion and the truths of revealed science will be showed can come together in harmony. This symposium, entitled “Science & Mormonism: Cosmos, Earth, & Man,” is upcoming on November 9, 2013, in Provo, Utah.  It is sponsored by The Interpreter Foundation, in cooperation with FAIR and LDSAgents.com.  Registrations are now open, and it is free to the public.  To register, click here.