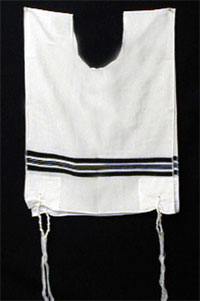 The tallit katan (literally the “little tallit”) is a white undergarment worn by the Jews, usually Orthodox or Hasidic, in order to fulfill the commandment given in Numbers 15:38-40 to make such a holy garment,

that ye may look upon it, and remember all the commandments of the Lord, and do them; and that ye seek not after your own heart and your own eyes, after which ye use to go a whoring:
That ye may remember, and do all my commandments, and be holy unto your God. (Num. 15:39-40; also found in Deut. 22:12)

In other words, the Jews wear this garment in remembrance of the covenants they have made with God. Other illuminating points to consider are:

Such practice even crosses over into Eastern Orthodoxy where upon doning the stole the bishop or priest reads a prayer from Psalms 133:

Certainly one who respects the Jews for their religious tradition, and Christ for his, of wearing such sacred clothing might also afford the Latter-day Saints’ the same opportunity. ((See the story in the Orlando Sentinel.))