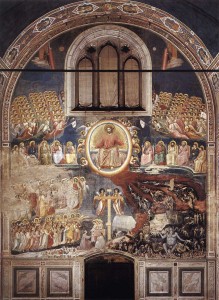 In response to a comment by Rick on my post “Consecrate = ‘A Filled Hand’ in Hebrew” I did some searching to see if I could find any commentary or studies of palm up/palm down symbolism in scholarship or art. What I found was interesting.  The palm up/palm down posture has a significant place in Christian art throughout the Middle Ages and the Renaissance, particularly in the figure of Christ.  They have been called the “judging gestures.” ((Jane C. Long, “Salvation through Meditation: The Tomb Frescoes in the Holy Confessors Chapel at Santa Croce in Florence,” Gesta, Vol. 34, No. 1 (1995), pp. 79.))

I first happened upon a depiction of The Last Judgment by Giotto in the Scrovegni Chapel in Padua, Veneto, Italy. This artwork was completed about in about 1305. The scene is a typical judgment, with Christ in the center, the saved on his right, and the damned on his left. One commenter adds some interesting insight into his posture:

The seven virtues and seven vices are sometimes shown in opposition. In the Scrovegni chapel, the Last Judgement shows God with his right hand palm up towards the saved, and along the right wall are the seven virtues. His left hand is palm down towards the damned, and along the left wall are the seven vices, each opposite its corresponding virtue. ((Number Symbolism in the Middle Ages.))

Giotto has filled the entrance wall of the chapel with a great scene of the Last Judgment. Christ’s left hand, palm down, condemns the damned to the horrors of Hell. His right hand, palm up, beckons the blessed to join him in heaven–and with them a hopeful Enrico Scrovegni. ((http://www.usccb.org/ccc/retreatguide.shtml))

This same pattern seems to repeat itself in many such depictions of Christ. The later famous depiction of The Last Supper by Leonardo da Vinci is said to have imitated Giotto’s posture of Christ, except with the palms reversed: 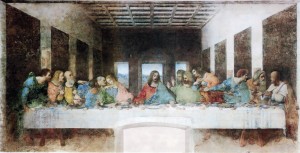 Understanding this, Jesus is not only at the center of infinity and providing his body and blood to the people, but he is infinite and universal in his body position. Leonardo references here Giotto’s painting of The Last Judgment, in which Jesus extends his arms with one palm up and one palm down. In doing so, Leonardo affirms Christ’s role as the viewer’s means of salvation. ((Lauren Harrington, “Cusanus, Leonardo and the Last Supper,” http://evergreen.loyola.edu/brnygren/www/honors/ldv.htm))

It is interesting that Christ has his hand down in the direction of the betrayer Judas Iscariot.

Another commenter on the scene of Leonardo’s The Last Supper said:

The mystical symbolism is repeated again in the hands of Jesus, positioned left palm up and right palm down, gestures which in the Renaissance symbolism of the Christian Kabbalists represented the pillars of the kabbalistic tree of life, Mildness and Severity- and the sephirot Geburah and Chesed- justice and mercy. The balance between these sephirah is Tiphareth, symbolized by the Seal of Solomon. (In Freemasonry, the square and compass shares similar symbolism). ((Leonardo da Vinci – The Last Supper. http://altreligion.about.com/library/davinci/bl_lastsupper.htm))

A woodcut from the Middle Ages shows the same posture, with this commentary:

From the right side of Jesus’ head comes the lily of mercy and from the left the sword of vengeance; his right hand, similarly, is held palm up for the saved and his left palm down for the damned. ((Wilson, Adrian, and Joyce Lancaster Wilson. A Medieval Mirror. Berkeley:  University of California Press,  c1984 1984. http://ark.cdlib.org/ark:/13030/ft7v19p1w6/))

There are many more examples of Christ in this posture, including The Last Judgment by Hieronymus Bosch (ca. 1482).

The seated figure of Christ floats above a rocky landscape in a mandorla and makes the customary judging gestures – right palm up to accept the saved, left palm down to reject the damned. ((Jane C. Long, “Salvation through Meditation: The Tomb Frescoes in the Holy Confessors Chapel at Santa Croce in Florence,” Gesta, Vol. 34, No. 1 (1995), pp. 79.)) 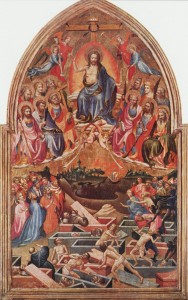 This posture again appears in Hans Memling‘s depiction of The Last Judgment (ca. 1467-1471).

It is also interesting that this posture is also found in other cultures and traditions, particularly in the mudra gestures of Buddhism.

So it would seem that in addition to the incense filled hand found in ancient Israel, the palm up/palm down symbolism does have a place in Christianity, especially in Christian art.  The palm up seems to depict blessing, receiving, mildness, mercy, and salvation, while the palm down seems to depict damnation, severity, justice, judgment, rejection, condemnation, and sin.  At least that is what the Christians in the Middle Ages and Renaissance might have believed.