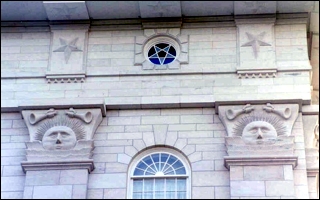 Why do these critics always assume the worst, and ignore the simple evidence? It didn’t take me more than a few minutes of Googling to find the following information on the symbolism of the pentagram from several different sites:

During the times of the Hebrew Scriptures (Old Testament), the pentacle was the first and most important of the Seven Seals – an amulet whose seals represented the seven secret names of God. It was inscribed on King Solomon’s ring, which is often called Solomon’s Seal in error. Each point of the pentagram was also interpreted as referring to the five books of the Pentateuch – the first five books in the Hebrew Scriptures; the Torah.

To the Hebrews the five points of the pentagram were tied to the Pentateuch (the first five books of the bible) and represented as a whole the concept of truth.

There are many connections between the pentagram and Christianity. Before the cross, it was a preferred emblem to adorn the jewelry and amulets of early Christians (followed by an ‘x’ or a phoenix). The pentagram was associated with the five wounds of Christ, and because it could be drawn in one continuous movement of the pen, the Alpha and the Omega as one.

A ‘point down’ pentacle is nothing new, nor is it necessarily Satanic when it appears as such. Historical depictions of the pentagram were as likely to be points down as point up; a distinction between one or the other was rarely made by the ancients.

Perhaps most curious is the pentagram as it relates to early Christianity. Constantine the Roman Emperor who converted to Christianity chose to use the pentagram on his seal and amulet. Up until medieval times, the five points of the pentagram represented the five wounds of Christ on the Cross. During these times the pentagram carried no evil implications at all and in fact, in a lesser way than the cross, was symbolic of the Savior.

Up until medieval times, the five points of the pentagram represented the five wounds of Christ on the Cross. It was a symbol of Christ the Saviour. This is in stark contrast to today where the pentagram is criticized by modern Fundamentalist Christians, as being a symbol of evil. The church eventually chose the cross as a more significant symbol for Christianity, and the use of the pentagram as a Christian symbol gradually ceased.

The adoption of the pentacle as a Satanic emblem is quite recent, dating only to the latter half of the twentieth century.

In the nineteenth century Eliphas Lévi, an Occultist, was the first to adapt the inverted pentagram as symbolic of evil.

Probably due to misinterpretation of symbols used by ceremonial magicians, it later became associated with Satanism and subsequently rejected by most of Christianity sometime in the twentieth century.

It’s amazing what a few minutes of Google will do. For most of human history the pentagram has symbolized good things – the heavens, stars, health, scriptures, truth, and even the Savior, Jesus Christ. The adaptation of the pentagram into a Satanic symbol is a modern invention, another attempt of the Adversary to turn everything that is good into evil (Isaiah 5:20).

FAIR also has gathered some good research on this subject.