Saint Apollinare in the orant position of prayer

The word orant, or latin orans, is a noun form of the verb orare, to pray, and describes an early mode of prayer practiced by the first Christians ((http://en.wiktionary.org/wiki/orant)). From Wikipedia we read:

Orant is a type of gesture during prayer in which the hands are raised, set apart, and the palms face outward. It was once common in early Christianity, and can frequently be seen in early Christian art, but has since become quite rare. The gesture is more common in Catholic worship, esoteric sects, and in certain forms of exorcism ritual. It is commonly used in small group renewal weekend settings such as Cursillo. This renewal weekend is offered by Catholic, Lutheran, and Episcopal churches. It is common in some charismatic churches during praiseful singing as well. ((http://en.wikipedia.org/wiki/Orant))

The image above comes to us from the Basilica of Sant’ Apollinare in Ravenna, Italy:

Saint Apollinare, the first bishop of Ravenna, is robed in a white dalmatic and purple tunic, embroidered with bees, symbolizing eloquence. He is in the early Christian “orant” position–with outstretched arms praying. ((http://www.bluffton.edu/~sullivanm/italy/classe/santapollinare/santapollinare2.html))

Orant posture from the catacomb of Priscilla

Another source informs us:

The orans (latin, prayer) gesture is an ancient mode of prayer common to many ancient religions. It is performed standing, elbows bent or at the side, with arms uplifted and palms upward- a gesture of supplication or pleading. 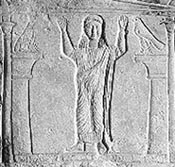 Funeral stele of an Egyptian woman

Why was the orans position gradually replaced when it was so widely practiced in the beginning? In fact, it’s practice extends back much further, as this article points out, that the gesture is “common to many ancient religions,” and shows one example from the funeral stele of an Egyptian woman (shown on the right).

One commenter adds to our understanding of the orant:

Then he adds interesting detail about the speculated meaning of this symbol’s use on sarcophagi and elsewhere:

Wilpert understands the orant to mean that the deceased are praying for the loved ones who survive them on earth. This is a consolatory reflection, and in fact many of the inscriptions addressed to the departed (and not only to eminent saints) ask for their prayers: Pete pro nobis. But this is not the only meaning of prayer. . . . The orant in the catacombs is evidently praying for himself, supplicating God for deliverance or giving thanks to him for it. . . . To the eye of the beholder it is an assurance that the individual depicted in that attitude is saved, that his prayer has been heard, and that he has entered into paradise, for the essence of prayer is faith. ((ibid., 65))

Lowrie notes that this symbol’s significance has no agreement among scholars, and many differing views have been expressed. ((ibid., 65)) Was it the living praying “for himself,” other living persons, for the deceased, or all of the above? If we go back to the writings of the early Christians, we might get a better picture. Cyril of Jerusalem (d. A.D. 386) helps to clarify why the early Christians were praying when he gave his lectures in Jerusalem around A.D. 350:

The embrace is, in fact, the sign of a mingling of souls and the erasing of all ill feeling. . . . We are turned toward the Lord, speaking in unison to declare our unanimity of spirit. . . . Then the priest says, Let us give thanks to the Lord. . . . for the thanksgiving prayer follows the prescribed order. . . . We pray for the common peace of the church and the well-being of the world (kosmos); for kings, commanders, and allies, for the sick and afflicted, and, in short, for all who need help. After that we remember the dead—patriarchs, prophets, apostles, martyrs—that God might grant our petition through the joining of our prayers with theirs. Then we pray for . . . all of our own people who have fallen asleep. I have often heard people ask: What good does it do the departed spirit, whether the person was good or bad in life, to be remembered in the prayer? . . . Answer: By doing for them and for ourselves what a loving God requires (exileoumenoi), we make available (prospheromen) the atoning sacrifice which Christ made for our sins. ((Hugh Nibley, The Message of the Joseph Smith Papyri, 520-521))

Cyril thus identifies these worshipers as acting out some kind of vicarious work, doing for the dead “what a loving God requires,” by making available to them the Atonement. Nibley notes that “Cyril does not mention the list of names on the altar in this account, but he does elsewhere, referring to this very custom and specifying separate lists for the living and the dead” ((Hugh Nibley, The Early Christian Prayer Circle, http://farms.byu.edu/display.php?id=59&table=transcripts)).

This attitude of prayer has also been studied extensively by BYU professor Stephen Ricks in “Prayer with Uplifted Hands in the Ancient World.” ((I’m unsure if this has been published anywhere. Please let me know.))