One of the excavated enclosures at Göbekli Tepe, Turkey, with massive T-shaped megaliths forming ancient stone circles thought to be up to 12,000 years old. (Click for a larger view)

Grandpa Enoch over at Pronaos wrote a few days ago that Archaeology Magazine‘s latest issue has a cover article by Sandra Scham entitled “The World’s First Temple” ((Archaeology Magazine, Volume 61 Number 6, November/December 2008, abstract)).  The magazine Science also did an article on the same subject back in January 2008 ((Science, Vol. 319. no. 5861, p. 280, abstract)).  There are many articles that are being published, all focused on one archeological dig in southeast Turkey (see this map) which has come to be known as Göbekli Tepe, a Turkish name meaning “navel hill/mountain” or “hill with a belly” ((Wikipedia – Göbekli Tepe.)).

What makes this excavation so unique?  Why all the hype?  Because evidence is showing that this may be the world’s first man-made monumental structure ever built, even before agriculture developed.  Archeologists didn’t believe that Neolithic hunter-gatherers were capable of building such an enormous complex at such an early date, but this site is starting to redefine our understanding of the beginnings of mankind.  What else is interesting is that this appears to have been some sort of ritual center or ceremonial complex – a temple. 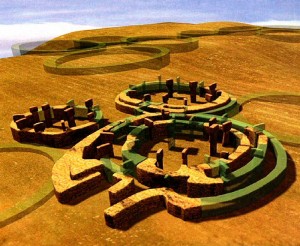 An artist's rendering of what Göbekli Tepe may have looked like.

The site was first noted as a serious archaeological interest in 1994 when a German archeologist, Klaus Schmidt from the German Archaeological Institute (DAI), began digging there.  Since that time Schmidt has led a team of archaeologists in unearthing parts of what has been determined was an enormous complex of stone circles formed into rooms dating back nearly 11,500 years ago, and intentionally buried in dirt around 8,000 B.C. (which is interesting in and of itself, since that preserved the site for ages instead of destroying it).  Only about 3-5% of the site has been excavated so far, which has yielded several of these stone circle rooms, only one of which has been dug down to the floor.  As many as 20 such structures are thought to exist under the ground at the site, detected by radar scans.

When we mention “stone circles” people usually immediately think of Stonehenge, which we’ve written about before here.  Göbekli Tepe, however, dates to even 7,000 years earlier than its more famous counterpart.  That’s right, it is twice as old as any other ritual complex found on the planet ((http://www.eurasianet.org/departments/insight/articles/eav041708a.shtml)).  Jacob, in the Bible, is noted for having raised a pillar of stone at Bethel, a name which means “House of God” (Gen. 35:14) ((See Dr. William Hamblin’s Podcast on Sacred Stones for more information about these pillars, and even some comments about Gobekli Tepe.)).

But why do the archeologists think it was a temple?  We still don’t know much about the religious practices at this site, but here are some of the things I’ve found.

Probably the biggest indicator that this may have been a temple lies in the fact that there has been no substantial evidence of any settlement at the site – no homes, no trash pits, etc. – the usual markers of human habitation.  In other words, this wasn’t a site where people lived, so they must have been doing something else.  The dating of the site indicates that the people were nomadic hunter-gatherers, so many archaeologists think that what was likely going on here was some sort of ritual – it was a shrine, or place of worship.  This has changed many archeologists’ theories about the beginning of mankind.  The history books have stated for a long time that people did not gather together and establish communities or centers of gathering (cities) until agriculture developed, sometime after 9,000 B.C.  But this complex shows otherwise, which has provoked lead archaeologist Klaus Schmidt to say, “Our excavations also show it is not a domestic site, it is religious – the world’s oldest temple” ((The First Post, http://www.thefirstpost.co.uk/1410,features,digging-for-history-in-turkey,2)).  The interpretation is that “first came the temple, then the city” ((http://www.dainst.org/index_642_en.html)).  I think Hugh Nibley would have agreed with that argument.  Furthermore, Schmidt gives another Nibleyesque statement on the “terrible questions” which these temples were made to answer: “In my opinion, the people who carved [the pillars] were asking themselves the biggest questions of all… What is this universe? Why are we here?” ((http://www.eurasianet.org/departments/insight/articles/eav041708a.shtml)).  It may have been the very rituals that these people were gathering to perform that led them to develop agriculture.  Andrew Curry in Science Magazine notes:

Archaeologists once hypothesized that agriculture gave early people the time and food surpluses that they needed to build monuments and develop a rich symbolic vocabulary. But Göbekli Tepe raises the alternative possibility that the need to feed large groups who gathered to build or worship at the huge structures spurred the first steps toward agriculture. ((Science Magazine.))

The site is on the top of a hill/mountain, which is the highest point in that area.  We learn from the scriptures and modern revelation that mountains are synonymous with temples.  People always ascended to their sanctuaries.  As Nibley often said, the temple is the cosmic mountain, the primordial mound or hill.  Moses ascended Mount Sinai.  Nephi was caught away to a high mountain.  The temple has even been referred to as “the mountain of the Lord’s house” (Isa. 2:2).  So it is not surprising to find a temple on a high hill.

Evidence indicates that people traveled from great distances to come to the site.  Many bone remnants have been found at Göbekli Tepe, indicating that animal sacrifice was performed ((Archaeology Magazine)). 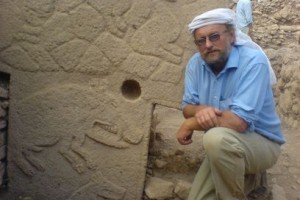 Klaus Schmidt suspects another reason why this might have been a temple:

Though he has yet to find them, he believes that the first stone circles on the hill of the navel marked graves of important people. Hauptmann’s team discovered graves at Nevali Çori, and Schmidt is reasonably confident that burials lie somewhere in the earliest layers of Göbekli Tepe. This leads him to suspect the pillars represent human beings and that the cult practices at this site may initially have focused on some sort of ancestor worship. ((Archaeology Magazine.))

Indeed, Sean Thomas has said that “human skeletons have been found, in telling positions, which indicate that Gobekli was possibly a funerary complex, a shrine that celebrated the life and death of the hunters” ((http://www.thefirstpost.co.uk/2880,features,gobekli-your-questions-answered,2)).

Schmidt has also noted that this was not only the first man-made monument, but “the first manmade holy place” ever built ((Science magazine.)).  Gary Rollefson, another archaeologist from Washington, also agrees – “Certainly it was a major focus for regional celebrations or ritual activity” ((Science Magazine.)).  While there are several such ritual sites in the region, Rollefson notes, “Göbekli Tepe’s really the only one with that megatemple approach” ((ibid.)).  Schmidt continues, “Here we have the religious center for settlements at least 50 kilometers away… Those were village churches; this is the cathedral on a hill” ((ibid.)).  Andrew Collins likewise agrees: “Göbekli Tepe can be described as sacerdotal, in that it was clearly utilised as a place of veneration and perhaps communication with supernatural entities and domains” ((http://www.andrewcollins.com/page/articles/Gobekli_Tepe_interview.htm)).

Another interesting note from Science Magazine is that this site has been deemed by some to be the original Biblical Garden of Eden ((Originally reported by a 2006 cover story in the German weekly Der Spiegel)).  Why?  Well, there are several reasons for this.  The location is generally the same as what is thought to be the beginning place of civilization – Turkey.  It also seems to follow the latest theories about the origin of the Garden story.  The online news magazine The First Post reports:

Historians have long wondered if the Eden story is a folk memory, an allegory of the move from hunter-gathering to farming. Seen in this way, the Eden story describes how we moved from a life of relative leisure – literally picking fruit from the trees – to a harsher existence of ploughing and reaping. ((http://www.thefirstpost.co.uk/1410,features,digging-for-history-in-turkey,2))

This site seems to depict that transition from hunter-gathering to agriculture.  But it goes further than that.  Even the landscape seems to match the Bible story.  The site is in the “fertile crescent,” right between the Tigris and Euphrates rivers, purportedly the rivers that flowed down from the Edenic paradise.  Even the vegetation at that time points to a paradise-like environment:

Animal and plant remains suggest that 11,000 years ago this place teemed with gazelle, aurochs, and deer. Groves of fruit and nut trees lined the rivers, and flocks of migrating birds paused here regularly. “It must have looked like a paradise, ideal for hunter-gatherers,” says Angela von den Driesch, an emeritus archaeozoology professor at Ludwig Maximilian University in Munich, Germany, who has classified animal remains at the site. The region was so rich that people could have settled down while still supporting themselves with hunting and gathering… ((Science Magazine.))

While it is highly suspect that this was actually the original Garden of Eden, particularly from an LDS point of view, just the fact that people are describing this “temple” as such is fascinating.  The Garden of Eden story has endless connections and parallels with the temple ((See The Gate of Heaven by Matthew Brown.  For some of the latest scholarly insights see Jeffrey Bradshaw’s 2008 FAIR presentation, “A Walk in the Garden.”)).

The Göbekli Tepe excavation has only just begun.  It will be interesting to watch and learn as more is discovered about this site, particularly if they can uncover in more detail the rituals and ceremonies that occurred there.

Klaus Schmidt has written several books on his finds at Göbekli Tepe, which can be found here on Wikipedia.  His latest book published in 2006 is entitled Sie bauten die ersten Tempel. Das rätselhafte Heiligtum der Steinzeitjäger, which is German for “They Built the First Temple. The Mysterious Shrine of Stone Age Hunters.”

There are also two great YouTube videos which show Göbekli Tepe, both the excavated ruins, and what they think the complex looked like.  The narration is in German, I believe. If you know the language, be sure to let us know if they say anything else interesting in the videos. I’ve embedded them below: