Recently I’ve been pondering the place of the temple in the Christmas story.  Last week my wife and I attended the Conference Center performance of Savior of the World which was very well done and depicted the birth and resurrection of Christ.  One of the first scenes involved the temple at Jerusalem.  As I have read through the Christmas story in the book of Luke I found that the temple holds a central theme in the account.  Here are some of my thoughts: 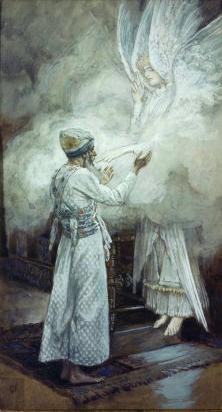 The Vision of Zacharias, James Tissot, 1899

Zacharias was a priest and the father of John the Baptist (Luke 1:5).  His wife was Elisabeth.  Of them the scriptures say:

And they were both righteous before God, walking in all the commandments and ordinances of the Lord blameless. (Luke 1:6)

One of the opening scenes from Savior of the World shows Zacharias going to the temple to perform his priesthood service (Luke 1:5-23).  The program we received at the performance described an interesting detail about this experience, referencing Alfred Edersheim’s book The Temple: Its Ministry and Services:

The most solemn part of the Jewish daily temple service was the incense offering, its rising smoke symbolizing Israel’s prayers.  Priests in a state of ritual cleanliness and worthiness were selected by lot to perform the offering.  Because of the great number of priests, the lot could fall to a priest only once in a lifetime, and many never enjoyed this privilege. ((Alfred Edersheim, The Temple: Its Ministry and Services, 148-50))

So Zacharias was a fortunate priest, indeed, to have received the lot to burn incense in the temple (Luke 1:9).  As we know, while in the temple Zacharias received a divine vision and ministration from the angel Gabriel, who appeared to him “standing on the right side of the altar of incense” (Luke 1:11).  Gabriel told Zacharias that he would be a father, that Elisabeth would bear a child, and that he would call his name John (Luke 1:13).  John would go forth in the power and spirit of Elijah to turn the hearts of the fathers to the children, a concept that was repeated in another heavenly vision to the prophet Joseph Smith by Elijah in the Kirtland Temple in 1836 (Luke 1:17; D&C 110:13-16).  When Zacharias didn’t believe the words, the angel said:

I am Gabriel, that stand in the presence of God; and am sent to speak unto thee, and to shew thee these glad tidings. (Luke 1:19)

I think this is an interesting verse, for Gabriel was standing in the presence of God in more than one sense, in that he was also standing in the temple, a place which for the Israelites was the literal dwelling place for deity upon the earth.  It was the place where God manifested himself to this covenant people.  Here again, God was manifesting his will to man, setting the temple again in the role of the gate of heaven, a place of revelation and divine communication.

Of course, the prophecy of the coming of John the Baptist was a precursor to the revelation of the conception and birth of the baby Jesus to the virgin Mary.  The same angel Gabriel came to her and announced the coming of the Savior through her.  It might not seem like there is any temple connection here, but there are early Christian traditions which place Mary in the temple as a youth, as well as extensive temple associations later.  Drs. William Hamblin and David Seely offer some insightful commentary about Mary in their excellent book Solomon’s Temple: Myth and History:

In these tales Mary was presented at the Temple as a young girl and prophetically blessed by the priests.  She lived her early life in the Temple, weaving the great veil that would eventually be rent at the Crucifixion (Matt. 27:51). She was “brought up in the Holy of Holies and received food from the hand of an angel, and heard hymns, and danced before him.”  ((William Hamblin and David Seely, Solomon’s Temple: Myth and History, 62.))

In addition, the vision of Gabriel to Mary has been linked to the temple:

In some traditions, the annunciation of the birth of Christ occurred in the Temple, after which the high priest had an angelic visitation in the Holy of Holies, in which he was ordered to select the widowed Joseph as husband for Mary. ((ibid., 62-63.))

Moreover, by conceiving and bearing Christ, Mary herself became a temple of the Lord:

Through the incarnation, Mary herself became a Temple: for God “willed to construct a temple in your womb, so that it might become His dwelling place.” . . . Mary also came to be identified symbolically with the Ark, as the dwelling place of God incarnate; in allegorical terms she was thus the Holy Holies of the new Temple, in which the presence of God was revealed as Christ. ((ibid., 63.))

Why was reference made twice in Luke 2 to His being wrapped in swaddling clothes? What is the meaning of those five words “wrapped him in swaddling clothes”? I sense a significance beyond the use of an ordinary diaper and receiving blanket. Instead of those five words in the English text, only one word is needed in the Greek New Testament. That word is sparganoo, which means to envelop a newborn child with special cloth, strips of which were passed from side to side. The cloth would probably bear unique family identification. That procedure was especially applicable to the birth of a firstborn son.

You remember the announcement of an angel at the birth of Jesus:

“This shall be a sign unto you; Ye shall find the babe wrapped in swaddling clothes, lying in a manger.” His wrappings surely would have been distinctive.

I think that such a concept of a cloth with family markings might also have been relevant when Joseph, son of Israel, became the birthright son and received the unique cloth coat of many colors–a fabric symbolic of the birthright. (Russel M. Nelson, “Christ the Savior is Born,” BYU Devotional, 10 December 2002, http://speeches.byu.edu/reader/reader.php?id=506)

These same swaddling bands may have been used also for Joseph and Mary’s wedding, as noted by Donna Nielsen in her book Beloved Bridegroom:

…swaddling bands were also to be embroidered with symbols indicating family history and genealogy. According to ancient and modern custom, the embroidery, to be acceptable, must be exactly the same on both sides. This was a type showing that the outward life and the inner life were the same–they were never to have a “wrong side” to their character. Under the wedding canopy, these decorated bands would be tied around the clasped right hands of the bride and the groom; hence the saying, “They tied the knot”. These bands would later be used to fasten the swaddling clothes of their children. ((Donna Nielsen, Beloved Bridegroom.))

Probably one of the most interesting recent studies of the Christmas story in connection with temple themes is Margaret Barker’s new book, Christmas: The Original Story.  I haven’t been able to get a copy of this book yet, but Dr. Hamblin was able to interview Margaret Barker a few months ago in which she spoke about some of the research in her book (see this part of the interview here, and here):

Those three gifts, gold, frankincense, and myrrh, the old tradition was, that Adam, the original high priest, the angels had given him those three gifts as souvenirs to remind him of the paradise that he had been expelled from, the paradise was code for the temple.  So gold, frankincense, and myrrh were symbols of the temple that had been lost, and the three wise men were bringing those symbols to the new Adam, talking about building the new temple.  I mean it’s all there.

It will be interesting to read any new insights that Barker brings to forefront with this interesting book.

As was Jewish custom, after forty days Mary and Joseph brought Jesus to the temple in Jerusalem to offer sacrifices at the temple.  There they met Simeon, a righteous man, who receive a revelation by the Holy Ghost that this child was the Savior of the world (Luke 2:25-35).  During the same visit they met Anna, a prophetess, who labored unceasingly in the temple, who also proclaimed that this was the Lord who would bring redemption (Luke 2:36-38).

These are some of my thoughts as I ponder on the birth of Christ during this holy-day.  The coming of the Savior in the flesh changed the nature of the temple forever after, for Jews, Christians, and Muslims alike, but that coming was intimately connected to the temple from the introduction of John the forerunner through the sacrifice of Christ on the cross, and continues to be a central part of the worship of millions today.  I am grateful for the blessing of having temples in our day, and of worshiping the Lord in the way he has prescribed for us, that we may become like Him.