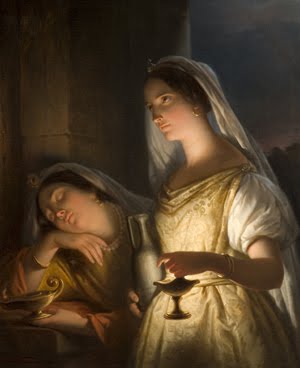 This was my response.

I once wrote about the connection between this parable and the temple.  It was a commentary on an article by Elder Robbins in the June 2007 Ensign entitled “Oil in our Lamps.”

Elder Robbins, as well as other General Authorities such as Elder McConkie, have said the ten virgins represent all members of the church.  Elder Robbins makes a comparison that those without oil are like those who do not have a temple recommend, and are therefore not permitted into the bridegroom’s home (the temple).  Those with oil are those members with temple recommends, and can and do enter the bridegroom’s home (the temple).

So, if you take what Elder Robbins says as a starting point, it is possible that all ten virgins are endowed members, but those foolish five either do not have a temple recommend or do not attend the temple.  What is clear is that it matters not if one is endowed, if they do not keep a current temple recommend, are temple worthy, and attend the temple, they will not be ready when the bridegroom comes and will not enter in with him.  They are no better off than not having been endowed.  Only those who keep oil in their lamps, worthily keep a current temple recommend and attend, will be ready.

In the Church, I think many believe that once we are endowed in the temple all is said and done, we’ve reached the goal, and gained a certain irrevocable exalted status.  But the power that comes from the temple comes in keeping a current temple recommend, staying temple worthy, and attending the temple.  Being endowed once doesn’t bring that power.  We need to keep our passport current.  Once expired, it does us no good.  The five foolish virgins without oil had oil in their lamps at one point (it was “going out” as the Greek says), but once it was gone, having had it before didn’t help them when the bridegroom arrived.

Let us have oil in our lamps when the Savior comes again.