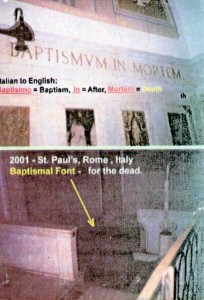 On the surface this sounds really exciting for LDS temple studies! Here we might have ancient evidence for baptism for the dead, mysteriously hidden from public view. But not so fast. Let’s do the requisite research.

After a bit of Googling it is revealed that this is simply the baptistry found on the lower level of St. Paul Outside the Walls (Basilica of St. Paul), in Rome, Italy, which is relatively open to the public, since others have visited there and taken photos (see below). The inscription has nothing to do with baptism for the dead at all.

Here are some notes from a friend of some returned missionaries who also visited the baptismal font on their tour of the basilica (without the mystery of passing beyond chained off areas): 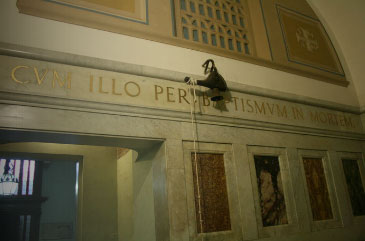 Photo showing more of the inscription. Found at: http://www.mixbook.com/photo-books/interests/italy-2010-5320942

Another photo of this inscription at the Basilica of St. Paul can be found on page twenty-three of this traveler’s photobook, shown here on the right. ((This individual also thought the inscription mysteriously had something to do with baptism for the dead.)) This photo shows a bit more of the same inscription: “CVM ILLO PER BAPTISMVM IN MORTEM.”  This gives us a bit more to go on.

After few more searches and we might infer the rest of the inscription: “CONSEPVLTI ENIM SVMVS CVM ILLO PER BAPTISMVM IN MORTEM.” ((See here, and here.))

It turns out that this is Latin from Romans 6:4: “Therefore we are buried with him by baptism into death:” This verse, of course, is not talking about baptism for the dead, but baptism as symbolic of death, and the death of Christ. The rest of the scripture, which can be found on another wall of the baptistry, reads, “that like as Christ was raised up from the dead by the glory of the Father, even so we also should walk in newness of life” (see the second photo below). On another wall of the same baptistry the preceding verse 3 can also be found: “Know ye not, that so many of us as were baptized into Jesus Christ were baptized into his death?” (see the third photo below).  Paul in chapter six of his epistle to the Romans wrote of baptism as a similitude of the death, burial, and resurrection of Jesus Christ, a perfect scripture selection to adorn the walls of the baptistry at St. Paul.

Here are some much clearer photos of the same baptistry at St. Paul Outside the Walls:

An ancient baptistry in the Basilica of St. Paul’s-Outside-the-Walls. The inscription seen here on the basin is from John 15:1, 5. (Click to enlarge). Found at: http://lukechandler.wordpress.com/2009/06/30/the-apostle-pauls-bones-identified/

Baptistery: The Papal Basilica of St Paul Outside the Walls (Italian: Basilica Papale di San Paolo fuori le Mura), commonly known as St Paul’s Outside the Walls. The inscription on the wall seen here is from the last portion of Romans 6:4. (Click to enlarge). Found at: http://www.fotopedia.com/items/flickr-344271350

St Paul – Outside the Walls – Baptistry. The inscription on the wall seen here is from Romans 6:3. (Click to enlarge). Found at: http://www.panoramio.com/photo/49303003

So, probably not as mysterious and closely tied to baptism for the dead as the email suggests. Now, if the inscription had quoted 1 Corinthians 15:29 in Latin, it would have been a bit more interesting. The Latin Vulgate of this scripture reads, “Alioquin quid facient qui baptizantur pro mortuis, si omnino mortui non resurgunt? ut quid et baptizantur pro illis?” Keep a lookout for this inscription!  Note that these inscriptions usually show U’s as V’s.

I am doubtful that this entire room was a font that was filled with water like a swimming pool, as suggested by the returned missionaries (with a “water line still visible on the walls”).  It seems to me that the area is simply a lowered region of the room, again, symbolic of burial, being low in the ground and located on the lower level of the basilica.  This is the same reason our baptismal fonts are located in the basement of our temples. In this baptistry at St. Paul, the photos clearly show a small covered baptismal basin, like a sink, in the center of the room.

Unfortunately, this baptistry is not as exciting a find as we might think, albeit beautifully designed and lined with marble, and the email that is circulating is a faith promoting rumor, an urban legend. There is evidence for the practice of baptism for the dead, but it won’t be found in this baptistry.