Seven years ago in 2006 I did a project as part of a course at BYU. The object of the project was to produce something substantially creative. I decided to recreate the Sistine Chapel as a computer generated virtual simulation. Since most people may not have a chance to visit the real Sistine Chapel, this would give them a chance to see this remarkable place, examine it, walk around, and view the masterpieces that adorn its walls. So I recreated the Sistine Chapel in a format called Virtual Reality Markup Language (VRML), reconstructing all of the high resolution photos I could find of the artwork on the walls and ceiling. Of course, the simulation falls short of the actual experience, as most simulations do, but it gives a good approximation. 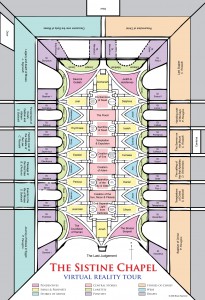 A map or diagram of the artwork found on the walls and ceiling of the Sistine Chapel. (Click to enlarge)

With the papal conclave to elect a new pope happening this week at the Sistine Chapel, as explained by William Hamblin and Daniel Peterson today in their Deseret News column, I’m reminded of the Sistine Chapel, and of that project seven years ago.  The webpage where I posted the project is still online.

Today I thought I’d see if my simulation still works, and was pleased to find that it does. You can still view it with the Octaga viewer, or you can use other VRML viewers too, such as the Cortona3D viewer.  To see the simulation, just install a viewer, and then open or go to the .wrl file. Using your mouse and the controls in the viewer (which can take some getting used to), you can walk all around the chapel, zoom in on the artwork, and even fly up to see the artwork high on the walls or the ceiling.

As part of my original project, I designed a map of the Sistine Chapel, to show the locations, titles, and some of the artist names of the artwork which is found there. This map is a bit different than your standard floor plan. Instead of looking down on the earth, this map visualizes looking up at a ceiling plan. You can see this map on the right (click to enlarge).

Since the time I did my project, better simulations of the Sistine Chapel have been created. One of the best I’ve seen is that from Steve Taylor of Vassar College, which he made inside the virtual reality game world Second Life. This simulation can still be found on Vassar Island within Second Life. Taylor’s recreation has the advantage of showing Raphael’s tapestries on the lower walls, which are rarely visible to the public at the real Sistine Chapel (made visible for 30 seconds by clicking on a sign). You can also hover your mouse over any of the artwork to see the titles in popups. 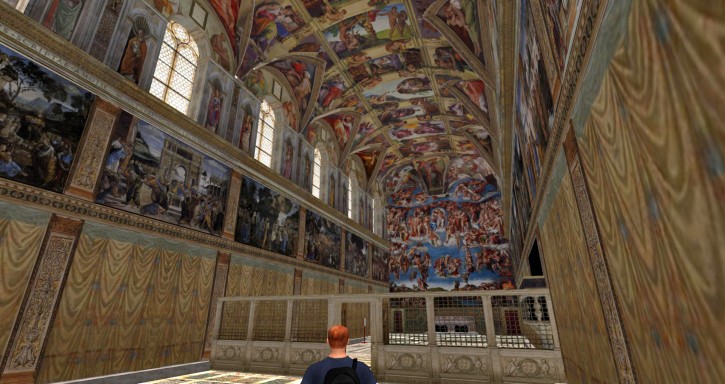