At the first of October, just last month, I had the privilege of traveling with other members of our stake and even President and Sister Higbee back to the important sites in early Church history. We visited the birthplace of Joseph in Sharon, Vermont. We visited Harmony, Pennsylvania, where the Prophet Joseph and Emma first lived after they were married. In the home in Harmony most of the Book of Mormon was translated and revelations were received. Just behind that home, not fifty yards, are the banks of the Susquehanna River where John the Baptist laid his hands on Joseph and Oliver’s heads and the authority of the Aaronic Priesthood was bestowed upon them. While Joseph and Emma lived in Harmony, the Apostles Peter, James and John came to the earth and laid their hands on the heads of Joseph and Oliver and bestowed upon them the Melchizedek Priesthood and the holy Apostleship.  END_OF_DOCUMENT_TOKEN_TO_BE_REPLACED 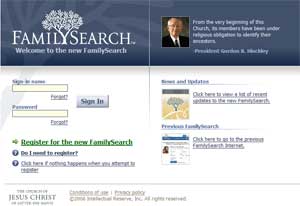 For those who may not know, for the past few years the Church has been overhauling and rebuilding FamilySearch, one of the world’s premiere family history and genealogy websites, to expand its features and functionality significantly. It has been several years in the making, and is slowly being rolled out to members in selected temple districts across the world. From what I have been able to gather, the new FamilySearch will enable members to do much more family history and temple ordinance preparation work from home online. Some of the new features will include:

The new FamilySearch has not been rolled out to END_OF_DOCUMENT_TOKEN_TO_BE_REPLACED