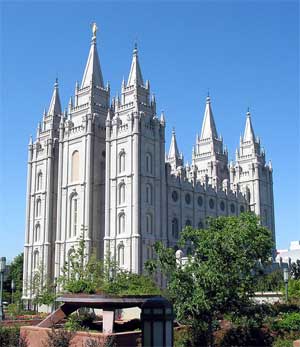 Google announced today the addition of “Street View” to the Salt Lake City area of Google Maps. What does that mean? You can now virtually visit any street across the entire Wasatch Front, from Pleasant View to Santaquin. You can drag the panoramic photos around with your mouse and look in 360 degrees, click the arrows on the street to move up and down the street and walk around the block, and click the zoom buttons to zoom in and out. You can even use the arrow keys on your keyboard to virtually drive down the streets. It’s fantastic.

I thought it would be fun to visit all eight temples in the valley which have Street View enabled. Now anyone in the world can feel like they’ve seen and walked around these temples in person. See all the interactive temple views below. (Works best in Firefox): END_OF_DOCUMENT_TOKEN_TO_BE_REPLACED

Here is another short video of the inside of LDS (Mormon) temples.  This video was found shared by Mike Batie, and was compiled from official published photographs by the LDS Church of the inside of temples.  Usually these photos are taken by the Church during its public open house, and before the dedication, after which the temple is closed to the public and set apart for performing sacred saving ordinances of the gospel of Jesus Christ.

The excellent music is entitled “The Power of Heaven,” with words and music by Steven Kapp Perry, arranged by Greg Hansen, and from the 1999 album “As Temples Fill the Earth.”  The vocalist is Tammy Simister Robinson.  You can buy the album at the BYU Bookstore or at Deseret Book.

What the inside of an LDS (Mormon) temple looks like is not a secret. Before the dedication of each new temple, they are opened up to the public in a several week-long open house. Many thousands of people are freely allowed inside to see the different rooms and feel the Spirit of the Lord that resides there. Pictures of the outside and inside are published by the Church. Then the building is closed to the public and is dedicated to the Lord and set apart for the work of performing gospel ordinances for the salvation of the living and the dead, the Atonement of Jesus Christ making it all possible.

See a short video inside the newest temple of the Church in Rexburg, Idaho, compiled from published photographs from the LDS Church.