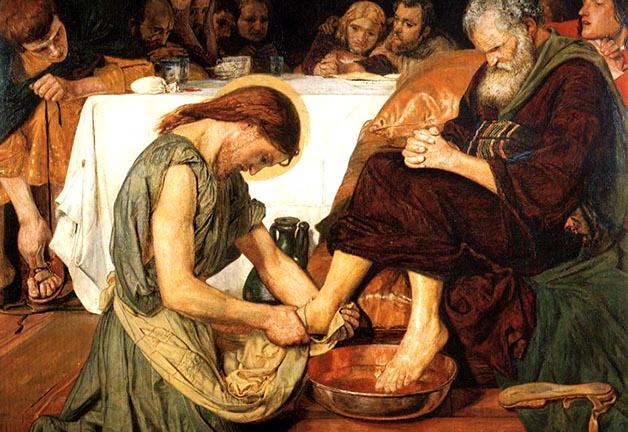 Indeed, the Prophet Joseph had this to say on the sacred occasion, in language that mirrors D&C 132:26:

On the 23rd of January, we again assembled in conference; when, after much speaking, singing, praying, and praising God, all in tongues, we proceeded to the washing of feet (according to the practice recorded in the 13th chapter of John’s Gospel), as commanded of the Lord. Each Elder washed his own feet first, after which I girded myself with a towel and washed the feet of all of them, wiping them with the towel with which I was girded. . . . At the close of the scene, Brother Frederick G. Williams, being moved upon by the Holy Ghost, washed my feet in token of his fixed determination to be with me in suffering, or in journeying, in life or in death, and to be continually on my right hand; in which I accepted him in the name of the Lord.

I then said to the Elders, As I have done so do ye; wash ye, therefore, one another’s feet; and by the power of the Holy Ghost I pronounced them all clean from the blood of this generation; but if any of them should sin wilfully after they were thus cleansed, and sealed up unto eternal life, they should be given over unto the buffetings of Satan until the day of redemption. ((HC, 1:323-324.))

Dr. Daniel H. Ludlow has also given us some insight:

Washing of feet is a gospel ordinance; it is a holy and sacred rite, one performed by the saints in the seclusion of their temple sanctuaries. It is not done before the world or for worldly people. . . .

As part of the restoration of all things, the ordinance of washing of feet has been restored in the dispensation of the fulness of times. In keeping with the standard pattern of revealing principles and practices line upon line and precept upon precept, the Lord revealed his will concerning the washing of feet little by little until the full knowledge of the endowment and all temple ordinances had been given. . . .

Thus the knowledge relative to the washing of feet has been revealed step by step in this day until a full knowledge is now incorporated in the revealed ordinances of the Lord’s house. Obviously the apostate peoples of the world, being without revelation to guide them, cannot comply with our Lord’s command given on the occasion of the last supper. ((Bruce R. McConkie, Doctrinal New Testament Commentary, vol. 1, 708.))

It is enlightening that originally the traditional church hymn “The Spirit of God Like a Fire is Burning!“, which was sung at the dedication of the Kirtland temple, had these words as one of the verses:

We’ll wash and be washed,
and with oil be anointed,
Withal not omitting the washing of feet;
For he that receiveth his penny appointed
Must surely be clean at the harvest of wheat. ((ibid., 710.))

In Elder McConkie’s excellent 4-volume series, The Mortal Messiah: From Bethlehem to Calvary, this apostle gave one of the most comprehensive discussions on this sacred subject:

After reclining at the Passover table, Jesus and his apostolic friends ate the Passover meal with such portion of its rites and ceremonies as then suited their purposes. Then he introduced the gospel ordinance of the washing of feet. . . . To keep things in proper perspective, however, it is important to emphasize that the washing of feet came in the course of the meal, not at the beginning, and it was not simply an illustration of Godly humility, devised by Jesus to demonstrate his teachings about precedence, but was in fact the introduction of a new gospel ordinance.

John alone records such portions of what transpired relative to the foot-washing ordinance as have come down to us from biblical sources; our more extended knowledge relative thereto comes from latter-day revelation. . . . And the two ordinances about to be revealed—those of the washing of feet and of the partaking of the emblems of his flesh and blood—these two become an eternal manifestation of the grace and goodness and love of the Lord for the Twelve and for all who believe and obey the gospel, thereby making themselves worthy to receive each of these ordinances. . . .

. . . He riseth from supper, and laid aside his garments; and took a towel, and girded himself. After that he poureth water into a basin, and began to wash the disciples’ feet, and to wipe them with the towel wherewith he was girded.”

This appears to be a general summary of all that transpired. What then follows are some of the particulars. As to these particulars, John says: “Then cometh he to Simon Peter: and Peter saith unto him, Lord, dost thou wash my feet?” Jesus replied: “What I do thou knowest not now; but thou shalt know hereafter.” That is: ‘You assume that I am acting only as any slave or host might, which is far from the case. I am about to perform a sacred ordinance, the meaning of which I will explain, and in due course you will know its true meaning.’ Still impulsive and reticent, the Chief Apostle said: “Thou“—our Master and Lord!—”Thou,” of all people, “needest not to wash my feet.” ‘Even though it be a sacred ordinance, let someone else do it instead!’ . . .

Jesus then said: “If I wash thee not, thou hast no part with me.” Catching a partial glimpse of the cleansing power of the new ordinance, Peter, ever impetuous, ever desiring to do all and more than need be, exclaimed “Lord, not my feet only, but also my hands and my head.” Jesus replied: “He that has washed his hands and his head, needeth not save to wash his feet, but is clean every whit; and ye are clean, but not all.”

At this point, with reference to the ordinance itself, John explains: “Now this was the custom of the Jews under their law; wherefore, Jesus did this that the law might be fulfilled.” The full significance of this is not apparent to the casual reader, nor should it be, for the washing of feet is a sacred ordinance reserved to be done in holy places for those who make themselves worthy. It is evident, however, that the Jews also had sacred ordinances performed in their temple, a knowledge of which has not been preserved, nor could it be, in any literature that has come down to us.

What had he done? He had instituted—nay, reinstituted, for “the order of the house of God has been, and ever will be, the same” — he had reinstituted one of the holy ordinances of the everlasting gospel. Those who have been washed in the waters of baptism, who have been freed from sin and evil through the waters of regeneration, who have come forth thereby in a newness of life, and who then press forward with a steadfastness in Christ, keeping the commandments and walking in paths of truth and righteousness, qualify to have an eternal seal placed on their godly conduct. They are thus ready to be endowed with power from on high. Then, in holy places, they cleanse their hands and their feet, as the scripture saith, and become “clean from the blood of this wicked generation.” (D&C 88:74-75, D&C 88:137-41.) Then, as the scripture also saith, they receive anointings and washings and conversations and statutes and judgments. (D&C 124:37-40.) Then they receive what Jesus here gave the Twelve, for as the Prophet said: “The house of the Lord must be prepared, . . . and in it we must attend to the ordinance of washing of feet. It was never intended for any but official members. It is calculated to unite our hearts, that we may be one in feeling and sentiment, and that our faith may be strong, so that Satan cannot overthrow us, nor have any power over us here.” (Commentary 1:709.). . . .

It should be clear to all, however, that just as the act of immersion in water only hints at the true significance and power of baptism, so the act of the washing of feet is far more than the cleansing and refreshing of dusty and tired pedal extremities. It is an eternal ordinance, with eternal import, understood only by enlightened saints. That it might be continued by those having divine authorization to perform it, Jesus said:

Ye call me Master and Lord: and ye say well; for so I am. If I then, your Lord and Master, have washed your feet; ye also ought to wash one another’s feet. For I have given you an example, that ye should do as I have done to you.
Verily, verily, I say unto you, The servant is not greater than his lord; neither he that is sent greater than he that sent him. If ye know these things, happy are ye if ye do them. . . .

And in conclusion, well might we ask: If true disciples are to wash each other’s feet, where among the sects of Christendom is this done? And how could it be done except by revelation? Who would know all that is involved unless God revealed it? Is not this holy ordinance one of the many signs of the true Church? ((Bruce R. McConkie, Mortal Messiah: From Bethlehem to Calvary, vol. 4, 36-41.))