The account of the garden of Eden in Genesis is a very interesting story indeed.  We learn much about the experiences of our first parents and their interactions with God.  It was a very intimate relationship, one in which God walked and talked with Adam and Eve in the garden (Gen. 3:8).

When Adam was first placed in the garden of Eden, he was given a charge to take care of it:

The Hebrew word for “dress” is avad, which means to work, labor or serve.  Closely related is the word avodah, which means service.  Even at this early date man was given a stewardship over the earth, and to take good care of it, even while it was still paradisaical! When Adam and Eve transgressed the law of God and fell they were sent from the garden into the dreary world, but with the same charge of stewardship:

Therefore the Lord God sent him forth from the garden of Eden, to till the ground from whence he was taken. (Gen. 3:23)

The word used for “till” is again, avad.  Since this term also means “to serve,” one could easily misinterpret what man was being commanded to do in these instances.  Man was not being commanded to “serve the earth.” This was hardly the Gaia worship we see rampant in the world today (check out the link).  It was actually far from it, which can be clearly seen from the use of the same word, avad or avodah, throughout the rest of the scriptures.  Hamblin and Seely inform us:

The same word God used when he commanded Adam and Eve to “work” in the Garden—avodah—is used to describe the “service” of the Tabernacle performed by the priesthood. ((Hamblin and Seely, Solomon’s Temple, 14.))

The “work” of man on the earth was to be tied directly to his worship of God, not the earth. Donald W. Parry expounds further on the meaning of these words in his latest paper in the Journal of Book of Mormon Studies:

As we are aware, the Old Testament sets forth a strong connection between temples and service. The Hebrew words ʿavodah (service) and ʿavad (serve) frequently refer to the ancient Israelite temple system. In fact, some Hebrew scholars and lexicographers disclose that the verb ʿavad, often translated “to work” or “to serve,” also means “to worship” or “to perform a (cultic) rite,” referring specifically to temple worship.

In this connection, service and serve occur approximately sixty times in the Hebrew Bible with regard to the Levite task of dismantling, transporting, and reassembling the Mosaic tabernacle. Service and serve also occur with regard to other official duties connected to the tabernacle (and later the temple), including the guard duty of the structure and its courtyard, the system of sacrifices, and the upkeep and care of the sacred furniture, utensils, and instruments.

The picture that we begin to see here is that avad and avodah have a much deeper and rich meaning than simple work or labor.  Such earthly work and labor were to be focused on serving and worshiping the God of heaven and earth. When Adam and Eve and their posterity went to “dress” the garden, or “till” the ground, they were to keep in mind Him who made it all for them, for it was the stewardship that He gave them to do it in the first place.

An interesting connection that also comes to mind is God’s statement to Adam and Eve:

In the sweat of thy face shalt thou eat bread [lehem], till thou return unto the ground; for out of it wast thou taken: for dust thou art, and unto dust shalt thou return. (Gen. 3:19)

Was this sweat and labor to be completely detached from the worship of God?

As one begins to study the history of the tabernacle of Moses and its construction, it becomes clear that those who ministered in this temple probably endured some intense heat.  First of all, the Israelites were wandering in a desert where the climate was likely arid and hot. Combine this with the coverings over the tabernacle proper:

The solid structure of the tabernacle was overspread by four separate and distinct coverings.  The innermost of these enclosures was a “tabernacle” (miskan) made of fine-twined linen followed by a “tent” (ohel) of black goat’s hair, a “covering” (mikseh) of ram skins that had been dyed red, and then a “covering” (mikseh) of dolphin skins (see Exodus 36:8-19). ((Matthew B. Brown, The Gate of Heaven, 68.))

The tabernacle was extremely well-insulated.  While this likely protected the sacred interiors from the elements of the desert outside, as well as being symbolic, it undoubtedly also produced sauna-like conditions inside the structure. 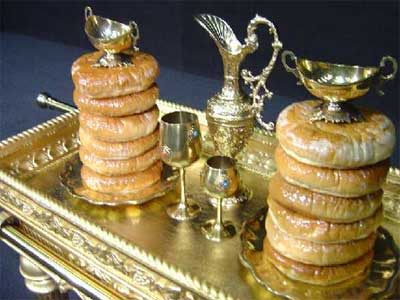 One of the few objects placed inside the tabernacle was the table of shewbread.  There were twelve loaves of this unleavened bread stacked in two rows of equal numbers.  As Matthew Brown acutely writes, “In Hebrew, ‘shewbread’ actually consists of two separate words—(paneh, face) and (lehem, bread)—hence a literal translation would be ‘bread of the face’ (the bread that sits before the face of Jehovah) or, as many translators prefer, ‘bread of the presence’ (the bread that sits in the presence of Jehovah)” ((ibid., 70.)).  Could this “bread of the face” have also had reference to the faces of the priests, who literally took upon themselves (and particularly their foreheads) the name of Yahweh in the Holy Place, and whose faces sweated to produce the bread and to partake of it weekly? Part of the priestly liturgy was to consume this bread, along with wine, while inside the sweltering tabernacle:

The priests were to gather inside the Holy Place every Sabbath day and consume the bread that lay upon the golden table (see Leviticus 24:8-9). ((ibid.))

Later, from the New Testament we learn that Christ was the “true bread” and the “true vine,” which became memorialized in the Christian sacrament or Eucharist ((ibid., 71.)).

So was the Lord’s injunction that “in the sweat of thy face shalt thou eat bread” solely a command to go to work on the earth to provide for oneself and forget one’s relationship with God in the garden, or did it also have reference to worship in the temple, tending to the earth to keep it in a temple-like state, service to God, remembering the atoning sacrifice of the Savior, and that all the things of the earth ultimately come from God, even our daily bread? (D&C 104:13-18; Matt. 6:11).

We should keep all of this in mind as we go to work each day and are good stewards of the earth, that God is our ultimate authority and sovereign, and that all labor and environmental obligations are subservient to Him and none else, and that all our passions are to be kept bridled within the limits prescribed by the restored gospel of Jesus Christ.