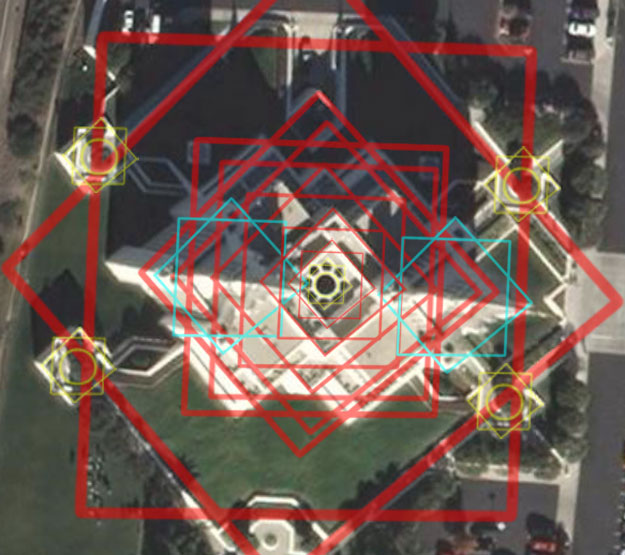 To continue my research I wanted to know as accurately as possible the story about this symbol, the “seal of Melchizedek,” as it was used in the San Diego Temple.  I couldn’t find a good account online, so I decided to go to the source.  Who better would know than the design architect of the temple?  So I gave him a call.

His name is William “Bill” S. Lewis Jr., and he is a member of the Church and a current sealer at the San Diego Temple.  He graduated from the University of Southern California in 1953 with a degree in architecture, was a co-owner of an architectural firm in San Diego for a number of years, and he has been involved with many architectural projects in the San Diego area.  I’m sure he counts his design work on the temple as one of his most cherished experiences.  He retired in 1990, after a 41-year career.  See the footnotes for a little more background about Br. Lewis  ((San Diego Modernism Historic Context Statement, pg. 86, http://ohp.parks.ca.gov/pages/1054/files/San%20Diego%20Modenism%20Context.pdf.  Modern San Diego biography, http://www.modernsandiego.com/LewisWilliam.html)).  He was very cordial on the phone, and gave me the courtesy of about a twenty minute phone call.  The story he told me was intriguing, and I thought it would be good to document it.

He said that the architects were given quite a lot of freedom on the design of this particular temple, and it was not dictated by the Church’s building department as other temples have been.  This freedom was granted expressly by President Hinckley.

He said they were working hard to find a common symbol, module, or pattern to give continuity to the design, or to give a certain character to the temple.  They started with a square, but they thought that was too plain and boxy.  Then they started chamfering the square’s corners which brought it to an 8-sided figure.  When they extended the lines it became two overlapping squares.  They thought that would work well and so they started using it more and more in the design of the temple.  He said that the more they used it the better and better it worked.  Some people asked about the symbolism of the design, and he told them he didn’t know if it had any particular symbolism.  He said that they put a circle in the middle, which he thought could have stood for the sun or the Celestial Kingdom.  He said that they used it many thousands of times all throughout the design of the temple – in the doors, fencing, exterior, interior, trimwork, floorplan, etc (see satellite photo above for the use of the symbol in the overall layout).  When the design was originally shown to the General Authorities in Salt Lake they had sun stones, moon stones, and star stones on the exterior of the temple too (mirroring the Salt Lake and Nauvoo Temples), but the Brethren notified them that these symbols shouldn’t be used.  So they removed these symbols, but they didn’t say anything about the interlocking squares symbol.

Once the temple was finished, Elder David B. Haight of the Quorum of the Twelve Apostles escorted the media through the temple, as they are some of the first that get to go through.  Someone from the media asked him what the symbol was, and what it represented, and Elder Haight was taken a little off-guard by that question.  He said that it was probably just an architectural detail.

Br. Lewis said that a good friend of his, Stan Smith, who has been a regional representative, and was the project representative on the temple, was taking photos all the time during the construction of the temple.  But this particular symbol bugged him for some reason.  He took the photos he had down to the Church Historian’s Office in Salt Lake City and asked if they knew anything about it.  They didn’t.  But they suggested that he take them down to Hugh Nibley at BYU who might know something about it.  So Br. Smith made an appointment with Br. Nibley, and sat down with him in his office and asked him if this symbol had a name.  Nibley said something like, “Oh sure, it is the seal of King Melchizedek.” He also indicated that it was a symbol of Melchizedek’s power, kingdom, and as a type of name of Melchizedek, like a seal in wax.

Stan Smith called Br. Lewis to tell him the good news, and was quite excited about it.  Br. Lewis wanted to verify it himself, so he made an appointment with Nibley too.  Nibley verified it with Lewis as well, after which they had an extensive conversation about all things temples, Greek, Roman, Egyptian, etc., with Nibley in typical fashion referring to all three in the same sentence.

Br. Lewis said that President Hinckley would probably be interested to know this detail about the symbol, since he had met with the architects 4 times throughout the design of this temple, which was extremely unusual.  So Lewis wrote a letter to President Hinckley, who Lewis said also verified it with Nibley.

Since then Br. Lewis has seen the same symbol used on the Newport Beach Temple, and also in several places in the Salt Lake Temple (like the door patrons enter with a beehive in the center), and he supposes that we will see it more and more as time goes on.  But he was pleasantly surprised to have found out such an interesting detail about the symbol that he used throughout the San Diego Temple.  He has been asked to speak hundreds of times about the design of the San Diego Temple in firesides and other occasions.  He said a couple years ago he was asked to speak at an event of the Fine Arts Department at BYU about it, but wasn’t sure of the details of the occasion.

It is doubtful that there is a transcription anywhere of this story, so I took as many details down as I could on our phone conversation.  Thanks to Br. Lewis for telling us this great story.