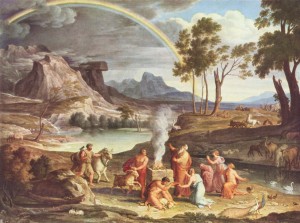 It is destructive times like these that cause us to reflect on God, and His place in our world.  It seems like cruel irony that the rainbow was placed as a sign of the covenant that God made with man that He would not flood the earth again.  But then again, that was surely a deliberate decision, that each time we witness these horrific natural events like hurricanes we remember God is still there, and that He knows our trials and tribulations (cf. Hel. 12:3).  Yes, even “if the billowing surge conspire against thee; if fierce winds become thine enemy; if the heavens gather blackness, and all the elements combine to hedge up the way; and above all, if the very jaws of hell shall gape open the mouth wide after thee, know thou, my son, that all these things shall give thee experience, and shall be for thy good” (D&C 122:7).  Events like these turn us back to God, and remind us to worship Him who is the Creator of heaven and earth.  It is only by obeying God’s commandments and enduring trying times such as these that we can “triumph over all [our] foes” (D&C 121:7-8):

This is a very insightful passage of scripture.  What we have here is a covenant pattern, with ritual enactments which bind the covenant.  God establishes a covenant with man, with a promise, and signs that covenant with a physical/visual token (Hebrew ‘owth [H226], also means sign, distinguishing mark, or ensign; perhaps related to our English word oath) by the setting of the rainbow in the sky in remembrance of that covenant.  Both God and man could look upon that token, the rainbow, and remember the covenant that they had made (v. 16).  It is also interesting that Ezekiel uses the rainbow to describe the glory and presence of the Lord (Ezek. 1:28).

Was it only a one-way covenant?  Absolutely not.  There is no such thing; covenants are by definition two-way agreements, which is clear in this scripture (see verses 9, 11, 12, 13, 15, 16, 17).  The above passage comes directly after Noah and his family had left the ark and Noah built up an altar and offered burnt sacrifices upon it (Gen. 8:20).  Noah was proclaiming his allegiance to God, and his remembrance of the ultimate sacrifice of His Only Begotten Son, and that he would follow God’s commandments by offering sacrifices and burnt offerings (cf. Moses 5:6-8).  These sacrifices were the sign or token of Noah’s promise before God.  Only after Noah offers his sacrifice does God make several reciprocal promises to Noah and his family, followed by God’s token of the covenant in the rainbow:

21 And the Lord smelled a sweet savour; and the Lord said in his heart, I will not again curse the ground any more for man’s sake; for the imagination of man’s heart is evil from his youth; neither will I again smite any more every thing living, as I have done.
22 While the earth remaineth, seedtime and harvest, and cold and heat, and summer and winter, and day and night shall not cease. (Gen. 8:21-22)
1 And God blessed Noah and his sons, and said unto them, Be fruitful, and multiply, and replenish the earth.
2 And the fear of you and the dread of you shall be upon every beast of the earth, and upon every fowl of the air, upon all that moveth upon the earth, and upon all the fishes of the sea; into your hand are they delivered.
3 Every moving thing that liveth shall be meat for you; even as the green herb have I given you all things.
4 But flesh with the life thereof, which is the blood thereof, shall ye not eat.
5 And surely your blood of your lives will I require; at the hand of every beast will I require it, and at the hand of man; at the hand of every man’s brother will I require the life of man.
6 Whoso sheddeth man’s blood, by man shall his blood be shed: for in the image of God made he man.
7 And you, be ye fruitful, and multiply; bring forth abundantly in the earth, and multiply therein. (Gen. 9:1-7)

You’ll notice that the blessings and stipulations of the covenant include promised land, posterity, and health, the same as the covenant that God made later with Abraham (Abr. 2:6-11), Isaac (Gen. 26: 1-4, 24), and Jacob (Gen. 28; Gen. 35: 9-13; Gen. 48: 3-4).  You’ll also notice that these blessings are a reversal of the consequences of the Fall of Adam and Eve.  For instance, Adam and Eve were told that the ground would be cursed for their sake (Gen. 3:17).  Here Noah is told that the ground is no more cursed (Gen. 8:21).  The commandment and blessing to be fruitful and multiply and replenish the earth is the same command Adam and Eve received before the Fall (Gen. 1:28).

A modern prophet in this dispensation has reemphasized the two-way nature of the covenant that God made with Noah, and the sign and token of the rainbow. The Prophet Joseph Smith taught:

I have asked of the Lord concerning His coming; and while asking the Lord, He gave a sign and said, “In the days of Noah I set a bow in the heavens as a sign and token that in any year that the bow should be seen the Lord would not come; but there should be seed time and harvest during that year: but whenever you see the bow withdrawn, it shall be a token that there shall be famine, pestilence, and great distress among the nations, and that the coming of the Messiah is not far distant.”

But I will take the responsibility upon myself to prophesy in the name of the Lord, that Christ will not come this year, as Father Miller has prophesied, for we have seen the bow… (HC 6:254; March 10, 1844)

The Lord deals with this people as a tender parent with a child, communicating light and intelligence and the knowledge of his ways as they can bear it. The inhabitants of the earth are asleep: they know not the day of their visitation. The Lord hath set the bow in the cloud for a sign that while it shall be seen, seed time and harvest, summer and winter shall not fail; but when it shall disappear, woe to that generation, for behold the end cometh quickly. (HC 5:402; May 21, 1843)

If man does not remember God, and his oblations to Him, then the covenant will be broken.  Does God make such covenants with man today?  I testify that He does, and only in His temple, the house of the Lord.

The singer/songwriter Kirby once wrote a song entitled “Hurricane Rainbow”:

Yes we’re alright – since we saw
A rainbow come down