This can be seen in the way the Bible is written in Hebrew, one of the oldest languages in the world.  In Hebrew, particularly the Hebrew Bible, there are cantillation marks that specify how the text should be sung:

Cantillation marks are described by Wikipedia:

Cantillation is the ritual chanting of readings from the Hebrew Bible in synagogue services. The chants are written and notated in accordance with the special signs or marks printed in the Masoretic text of the Hebrew Bible (or Tanakh) to complement the letters and vowel points…

A primary purpose of the cantillation signs is to guide the chanting of the sacred texts during public worship. Very roughly speaking, each word of text has a cantillation mark at its primary accent and associated with that mark is a musical phrase that tells how to sing that word…

Even the name of the symbols themselves, cantillation marks, gives us a sense of what they are and were used for, the cant- prefix meaning “to sing.” 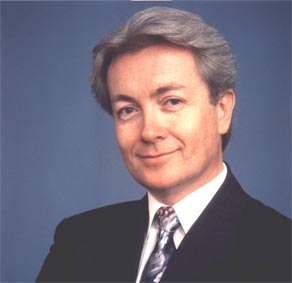 In his commentary on that program, Br. Ballam said that back in the 1990s he took a sabbatical to go to Israel, and one of the things he wanted to study was the art of cantillation, the way the scriptures are sung in the Jewish synagogue.  This is an ancient tradition, one that Br. Ballam says the Jewish tradition dates back to Moses:

How did Moses, the author of the Torah or The Law, the first five books of the Bible, convey the message to the children of Israel?  He wrote it down on stone or metallic plates of copra, gold etc; he sang the law to them. He couldn’t pass around the law in those plates or in those stones. He would have to communicate orally and he did it by singing. The holy writings or scriptures were conveyed in an oral tradition from generation to generation by chanting. That tradition is called Hassan or hassanot in plural. That’s why I went to Israel. I wanted to understand that tradition. Not having been brought up in that tradition I wanted to understand its derivation. Moses, Aaron and ultimately the Rabbis in the synagogues and temples would convey God’s will through the means of singing his will. It is Jewish tradition that Moses was commanded of God to sing the scriptures to impress upon them their meanings, into their minds and into their hearts.

Br. Ballam wanted to be able to read, hear, and sing those scriptures the way they would have been sung by Moses, and the ancients, before they were written down:

Now, the tradition of chanting the Holy writings were passed down in an oral tradition per centuries until a group of Rabbis in Tiberius, on the Southern shore of the sea of Galilee, determined it was time to write it down, so that it could be more stable. There are a series of marking called Chantalatian markings, there is the prefix Chantalatian, are found in most credible Hebrew Bibles. They are written directly under the words and moved from right to left, remember Hebrew goes from right to left, English goes left to right. They indicate when the pitches go up, when the pitches go down, when they come to a stopping point and when they need to be embellished, given special emphasis. They are supposedly as close to what the children of Israel heard from Moses in the wilderness as possible. One of my goals in going to Israel was to find someone who could read those Chantalatian markings and tell me the authoritarian sound that went with them. I found such an expert, Israel Vault, in a Hebrew University. He began by chanting for me those first lines of the Torah, the Bible. “Bereshit bara Elohim et hashamayim ve’et ha’arets.” The pitch goes up on the word Eloh-im. Why? The name of the Supreme Deity. “ve’et ha’arets”. There is a punctuation there. It comes to a conclusion. That is we hear a cadence. It comes to an end, a period there.

To hear what those first lines of Genesis 1:1 sound like sung in Hebrew, press play in this audio clip:

This is where things got interesting for Br. Ballam.  The expert, Israel Vault, told Br. Ballam an amazing story, and asked him if he could explain it:

He came to America a number of years ago and was asked to speak in a university in New Mexico. He began to chant the Torah: “Bereshit bara Elohim et hashamayim ve’et ha’arets”. As he began to chant, he noticed a segment of the audience becoming very interested, even agitated by it. At the conclusion of the class was met by a group of students all of whom were Native Americans from a Tribe and they asked him a question. Where did you get that music? He said: well, I got it out of the Bible its right there; it has been there for centuries. Why do you ask? And the spokesperson for this group of Navajo students said: It’s fascinating to us that, though the words are in a different, it’s the same tune that our fathers used to explain the creation to our tradition. Then Israel said to me: I don’t understand this. How could this group in another continent, from another separation of time have this same melody to describe creation from the same perspective that ancient Israel did? He asked me if perhaps, those Navajos could be part of the lineage of the tribes of Israel. Would they in fact be one of the lost tribes? I didn’t have a definitive answer for him but it is very interesting that the same tune that described the creation of the world in ancient Israel is also the same tune that describes the same story in ancient and modern Navajo.

Hugh Nibley would probably explain the synchronicity by telling about the universality of the creation song:

The word for poetry, poiema, means “creation  of the world.”  The business of the Muses at the temple was to sing the creation song with the morning stars. Naturally, because they were dramatizing the story of the creation, too, the hymn was sung to music (some scholars derive the first writing from musical notation). The singing was performed in a sacred circle or chorus, so that poetry, music and dance go together. (Lucian’s famous essay on the ancient dance, among the earliest accounts, takes it back to the round dance in the temple, like the prayer circle that Jesus used to hold with the apostles and their wives — Jesus standing at the altar in the arms of Adam, and the apostles’ wives standing in the circle with them. Some have referred to this as a dance; it is definitely a chorus.). So poetry, music, and dance go out to the world from the temple — called by the Greeks the Mouseion, the shrine of the Muses.

The creation hymn was part of the great dramatic presentation that took place yearly at the temple; it dealt with the fall and redemption of man… ((H. W. Nibley, “The Meaning of the Temple,” Temple and Cosmos.))

I don’t have a definitive answer either for why the sung Hebrew Bible would be familiar to Navajo Native Americans, but Nibley gives us a good candidate.  Music was used in the earliest of temples to convey the ritual to the initiates.  It was one of the only modes of transmission the people had to pass the story and rites on from one generation to another.  Might the music contained in the Hebrew Bible be the same music sung by the Native Americans to describe the creation story?  Might it be the same creation song that was heard in the temple anciently?  It’s possible.

In other more personal news, I resigned from my job today.  I am a designer by profession, and unfortunately I became overqualified for my position.  If anyone is aware of design work or open designer positions available, I would appreciate any leads.  I do all kinds of design – product design, graphic design, web design, etc.  You can contact me here.

Here’s a link to my design portfolio: