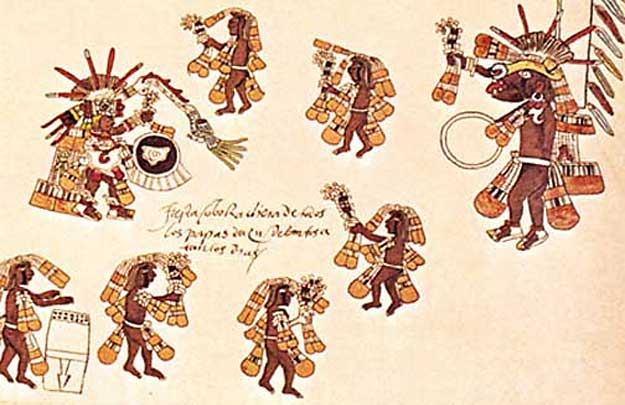 Aztec round dance for Quetzalcóatl and Xolotl

The Genesis of the Round Dance

“Then shalt thou dance in a ring together with the angels, around Him
who is without beginning or end, the only true God . . .”
—Clement of Alexandria ((Backman, E. Louis. Religious Dances in the Christian Church and in Popular Medicine. London: Allen & Unwin, 1952, 19))

So as not to confuse the term, when I say “round dances”, “ring dances”, or “circle dances”, I mean those acts in which the participants form circles and revolve or rotate in a circular motion. Many writers consider the circle to be the oldest known dance formation in the history of the world ((“Circle Dance.” Wikipedia: The Free Encyclopedia. 26 Aug 2006. 19 Nov 2006. Wikimedia Foundation, Inc. http://en.wikipedia.org/wiki/Circle_dance)). Sachs and Langer note that the circle has been an important symbol in dance since primitive man, representing “the sacred realm, the magic circle,” where “great powers are loosed” and the “ordinary world is locked out” ((qtd. in Ellfeldt, Lois. Dance, from Magic to Art. Dubuque, Iowa: W. C. Brown Co., 1976, 43)). Lucian adds in his classic essay “The Dance” that the earliest model for dance was the universe. Dance was performed in a circle around the altar to reflect the motions of the cosmos, particularly the zodiac or the planets around the sun ((Backman, E. Louis. Religious Dances in the Christian Church and in Popular Medicine. London: Allen & Unwin, 1952, 16)). One thing is certain: the ring dance has been used in almost every culture, every people, and every religion that this world has known. It is universal ((Nibley, Hugh. “Abraham’s Creation Drama.” Maxwell Institute. 6 Apr 1999. 19 Nov 2006. Brigham Young University. http://farms.byu.edu/display.php?table=transcripts&id=72)). Such broad use of the same repeated “archetypal gesture” displayed in such “diverse cultural contexts” surely indicates a common source in the beginning of time ((qtd. in ibid.)).

Since it is so widespread, it is difficult to provide a comprehensive background of this dance form. The histories of many regions, including those of ancient Greece, ancient Rome, Mesopotamia, Africa, Eastern Europe, Ireland, Spain, South America and North America, contain evidence of the presence of the ring dance ((“Circle Dance.” Wikipedia: The Free Encyclopedia. 26 Aug 2006. 19 Nov 2006. Wikimedia Foundation, Inc. http://en.wikipedia.org/wiki/Circle_dance)). Several examples should suffice to illustrate that it has reached every corner of our planet.

Among the oldest lineage-based societies of the world, such as those from the Neolithic time period, the round dance provided a place where

Circle dancing has also had a profound place in the practices of the Native American Indians of the North American continent, practiced in indoor dancing, women’s society outdoor dances, spring dances for crops, borrowed tribal dances, and in the dances by both sexes around the scalp pole at Zuni, Isleta, and Taos ((Parsons, Elsie Worthington Clews. Pueblo Indian Religion. Chicago, Ill.: University of Chicago Press, 1939, 388)). Kraus informs us that in certain Native American rituals, after numerous secret rites were completed to purify and prepare the initiates, there was a ceremonial search for the center pole that they would then dance around in a circle ((Kraus, Richard G., Sarah Chapman Hilsendager, and Brenda Dixon Gottschild. History of the Dance in Art and Education. 3rd ed. Englewood Cliffs, N.J.: Prentice Hall, 1991, 34)). The chants and dances that are performed in circles around fires have even become, for many, the stereotypical prototype of the rituals of Native American culture.

Similarly, anthropologists and scholars have found that the round dance was used extensively in ancient Mesopotamia. In the musical culture of ancient Sumer, liturgical flute songs accompanied a procession of singers dancing around an altar in a sacred ritual ((ibid., 37)). In Babylonia, evidence of temple dancing has also been discovered. In the text of Assurbanipal, it reads that “at a religious festival the performers danced a ring-dance to musical accompaniment around the idol of the god who was being worshipped” ((ibid., 37)). This dance was cued in some way by the signs of the zodiac, with each sign stemming from the center and the dancers in the ring surrounding the signs and facing outward ((Ellfeldt, Lois. Dance, from Magic to Art. Dubuque, Iowa: W. C. Brown Co., 1976, 54)).

Ancient Egypt’s history also shows an abundance of ritual circle dancing. Ellfeldt describes it as similar to the Babylonian version: “Ranging around a fixed altar, which represented the sun, priests clad in brilliant costumes made signs for the zodiac with their hands, while turning rhythmically from east to west, following the course of the planets” ((ibid., 55)). Plato also points out that the Egyptians did this to represent the dance of the planets and stars around the altar of the sun ((Backman, E. Louis. Religious Dances in the Christian Church and in Popular Medicine. London: Allen & Unwin, 1952, 16)). Again there is a connection between the ring dance and the cosmos.