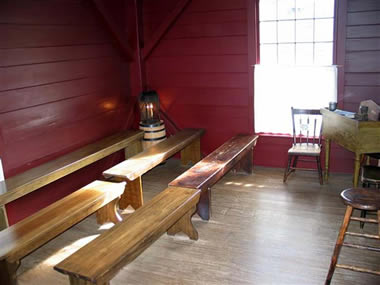 I hadn’t made this connection before, but it seems to jump out at me now like red ink. I knew that the School of the Prophets was a select group of brethren who participated in an effort to prepare themselves for the missionary work, but it also had a much more spiritual side with hints and shadows of the pending promises and revelations of an endowment of power from on high.  The School of the Prophets was preparing the Church for the temple.

I’m reading Dr. Richard Bushman’s excellent biography, Joseph Smith: Rough Stone Rolling, and this impressed me when I read the following about the revelation of D&C 88 and the organization of this school: END_OF_DOCUMENT_TOKEN_TO_BE_REPLACED

There is an interesting post at The T&T Clark Blog with a transcription of an address that BYU’s John Welch gave on March 5th in London at a conference about Margaret Barker’s latest book, Temple Themes in Christian Worship, and her scholarly work on temple subjects in ancient Christianity and Judaism. FARMS lists Welch as serving on the executive committee of the Biblical Law Section of the SBL, but in this review he also mentions that he has been selected as one of the organizers of a new section on Temple Studies in the SBL. I am not very familiar with the SBL, but this sounds like a fantastic leap forward in temple studies among biblical scholars.

Some highlights from this address are: END_OF_DOCUMENT_TOKEN_TO_BE_REPLACED

So where are they? END_OF_DOCUMENT_TOKEN_TO_BE_REPLACED