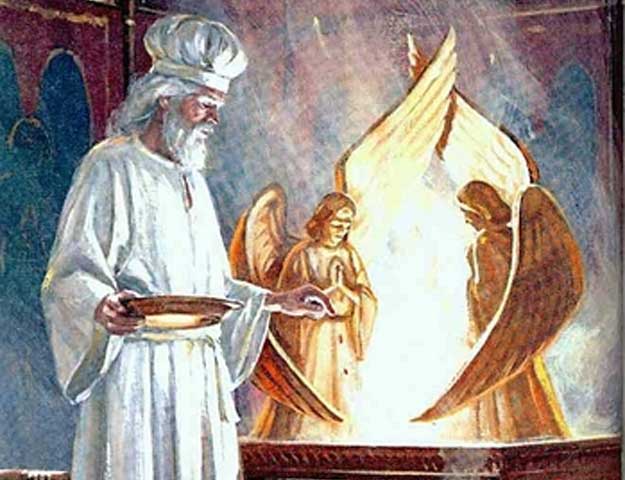 The first example that we might look at is Paul’s own theophany, which he experienced in the temple of Jerusalem shortly after his conversion:

12 And one Ananias, a devout man according to the law, having a good report of all the Jews which dwelt there,
13 Came unto me, and stood, and said unto me, Brother Saul, receive thy sight. And the same hour I looked up upon him.
14 And he said, The God of our fathers hath chosen thee, that thou shouldest know his will, and see that Just One, and shouldest hear the voice of his mouth.
15 For thou shalt be his witness unto all men of what thou hast seen and heard.
16 And now why tarriest thou? arise, and be baptized, and wash away thy sins, calling on the name of the Lord.
17 And it came to pass, that, when I was come again to Jerusalem, even while I prayed in the temple, I was in a trance;
18 And saw him saying unto me, Make haste, and get thee quickly out of Jerusalem: for they will not receive thy testimony concerning me.
19 And I said, Lord, they know that I imprisoned and beat in every synagogue them that believed on thee:
20 And when the blood of thy martyr Stephen was shed, I also was standing by, and consenting unto his death, and kept the raiment of them that slew him.
21 And he said unto me, Depart: for I will send thee far hence unto the Gentiles. (Acts 22:12-21)

It is interesting to note that prior to this vision of the Lord in the temple that he had been visited by Christ on the road to Damascus, which he recounted earlier in the same chapter of Acts 22. But Paul never says that he saw Jesus when he fell and heard the voice. All he says is that he saw a “great light” shining from heaven, a light so bright in fact that it caused temporary blindness (v. 11), and heard a voice from the light. It was not until Paul went to the holy temple in Jerusalem that he says he “saw him” (Acts 22:18). It is also insightful that it was near this time of his vision of Christ when he received his new name of Paul, his original name being Saul.

When the temple of Solomon was finished in Old Testament times, one of the signs of God’s acceptance of it was the filling of the sacred house with the glory of God:

13 It came even to pass, as the trumpeters and singers were as one, to make one sound to be heard in praising and thanking the Lord; and when they lifted up their voice with the trumpets and cymbals and instruments of musick, and praised the Lord, saying, For he is good; for his mercy endureth for ever: that then the house was filled with a cloud, even the house of the Lord;
14 So that the priests could not stand to minister by reason of the cloud: for the glory of the Lord had filled the house of God. (2 Chr. 5:13-14; cf. 2 Chr. 7:2-3)

The very reason why the structure was called the “house of the Lord” and the “house of God” was because it was a place where God Himself could make his abode on earth, where the divine presence was, where His glory filled the house. Solomon says as much in the following chapter:

1 Then said Solomon, The Lord hath said that he would dwell in the thick darkness.
2 But I have built an house of habitation for thee, and a place for thy dwelling for ever. (2 Chr. 6:1-2)

A cloud, the very symbol of the divine presence, associated with the sacred sanctuary occurred even earlier with the tabernacle of Moses:

And on the day that the tabernacle was reared up the cloud covered the tabernacle, namely, the tent of the testimony: and at even there was upon the tabernacle as it were the appearance of fire, until the morning. (Num. 9:15; cf. Ex. 24:15; D&C 84:5)

Within the tabernacle, and the temple, was the Ark of the Covenant. On the top of the Ark was the mercy seat. This is the very place that God manifested himself to Israel, and gave them instructions:

And there I will meet with thee, and I will commune with thee from above the mercy seat, from between the two cherubims which are upon the ark of the testimony, of all things which I will give thee in commandment unto the children of Israel. (Ex. 25:22)

Indeed, the Lord is said to have dwelled between the cherubims on the ark within the tabernacle (cf. 1 Sam. 4:4). At one point the Lord reminded Moses under what conditions Aaron was allowed into the holy place of the tabernacle, because the divine presence was there:

And the Lord said unto Moses, Speak unto Aaron thy brother, that he come not at all times into the holy place within the vail before the mercy seat, which is upon the ark; that he die not: for I will appear in the cloud upon the mercy seat. (Lev. 16:2)

Clearly the tabernacle and the temple were places of God’s dwelling, for God had directed the construction for that very purpose.

Returning to the question of the necessity of temples the post-Messianic age, if there was to be no temple after the sacrifice of Jesus Christ, the Son of God, then we would not expect to find future prophecies of temples in the Bible. However, we find just the contrary. In a prophecy of the last days we find that the Anti-Christ will enter and sit in the temple of God:

3 Let no man deceive you by any means: for that day shall not come, except there come a falling away first, and that man of sin be revealed, the son of perdition;
4 Who opposeth and exalteth himself above all that is called God, or that is worshipped; so that he as God sitteth in the temple of God, shewing himself that he is God. (2 Thes. 2:4)

Such an occurrence can not happen if there is no “temple of God.” Isaiah also forsaw a temple in the last days:

2 And it shall come to pass in the last days, that the mountain of the Lord’s house shall be established in the top of the mountains, and shall be exalted above the hills; and all nations shall flow unto it.
3 And many people shall go and say, Come ye, and let us go up to the mountain of the Lord, to the house of the God of Jacob; and he will teach us of his ways, and we will walk in his paths: for out of Zion shall go forth the law, and the word of the Lord from Jerusalem. (Isa. 2:2-3)

Ezekiel records a lengthy vision of a future temple in Ezekiel 40-48. Malachi also prophesies of the future advent of the Lord coming suddenly to a temple (Mal. 3:1). And John records in his vision a heavenly temple, which was still in full use even in heaven (Rev. 3:12; Rev. 7:15; Rev. 11:1).

Regarding Paul’s instruction that we are the temple of God, he said to the Corinthians:

9 For we are labourers together with God: ye are God’s husbandry, ye are God’s building.
10 According to the grace of God which is given unto me, as a wise masterbuilder, I have laid the foundation, and another buildeth thereon. But let every man take heed how he buildeth thereupon.
11 For other foundation can no man lay than that is laid, which is Jesus Christ.
12 Now if any man build upon this foundation gold, silver, precious stones, wood, hay, stubble;
13 Every man’s work shall be made manifest: for the day shall declare it, because it shall be revealed by fire; and the fire shall try every man’s work of what sort it is.
14 If any man’s work abide which he hath built thereupon, he shall receive a reward.
15 If any man’s work shall be burned, he shall suffer loss: but he himself shall be saved; yet so as by fire.
16 Know ye not that ye are the temple of God, and that the Spirit of God dwelleth in you?
17 If any man defile the temple of God, him shall God destroy; for the temple of God is holy, which temple ye are. (1 Cor. 3:9-17) 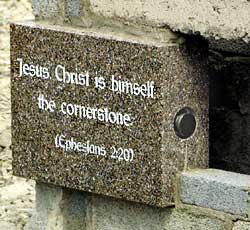 Using the analogy that we are the temple of God does not preclude, as we have seen, the notion of a physical temple building, just as using the analogy of members of the Church as the stones of a building with Christ as the chief cornerstone does not forbid the existence of a tangible stone and mortar synagogue in which to worship the Lord, nor the actuality of a physical cornerstone. The symbolic act of offering animal sacrifice under the Mosaic law did not replace the veritable sacrifice of the Lamb of God in the meridian of time. The tokens of bread and water used in the holy sacrament did not, and do not, prevent the offering of the body and blood of Christ in Gethsemane and on the cross. These are symbols and similitudes used to teach a lesson, in this case, that we must act in accordance with God’s law in order to receive of His Spirit, and to treat our physical bodies as sacred and holy gifts which God has entrusted to our stewardship. Symbols do not exclude reality—they reinforce it. Furthermore, such scriptures strengthen the conception that God does, in fact, dwell in temples; they do not detract from it.

I know that the Lord has revealed the temple today. He has commanded the construction of over 140 of them around the world, and is preparing His covenant people through a process of purification and sanctification therein to be prepared for the great work that lies ahead in fulfilling the redemption of mankind. Just as the mortal Messiah ordained apostles and sent them forth to preach his word and act in his name, so also has he called prophets and apostles today, to preach His gospel and to administer in its ordinances, which ordinances can only be performed in a space consecrated for that purpose – the temple of the Lord.