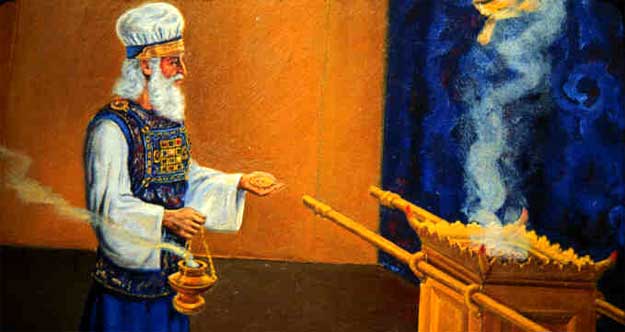 Some of our critics have been quick to contend that our modern temples and practices have no relationship whatever to the temples of ancient Israel. This is a quick judgment indeed. If one is willing to open their eyes that they may hear, and their ears that they may see, then many marvelous understandings of God’s purposes may be unfolded to their view (D&C 136:32; 3 Nephi 11:5; Isa. 35:5; 1 Ne. 10:19; Mosiah 2:9; D&C 6:7; D&C 11:7).

One of the vessels that was placed inside the ancient Israelite tabernacle, and later in the temples of Solomon (First Temple) and Zerubbabel (Second Temple), was the altar of incense.  The structure of the altar was similar to the ark of the covenant, with four horns at the corners, and golden rings on the four corners so the altar could be moved from place to place.  When placed in the tabernacle or temple it was placed directly before the veil which separated the holy place from the holy of holies where the divine presence and the Ark of the Covenant stood (Ex. 30:6).

Matthew B. Brown helps us understand the function and purpose of this altar:

A special mixture of pure incense made with sweet spices was burnt upon the golden altar every morning and every evening (see Exodus 30:7-8; Exodus 37:29). The symbolism behind this act can be discerned from a passage in the book of Revelation where we read that in the heavenly temple an angel “came and stood at the altar, having a golden censer; and there was given unto him much incense, that he should offer it with the prayers of all saints upon the golden altar which was before the throne. And the smoke of the incense, which came with the prayers of the saints, ascended up before God out of the angel’s hand” (Revelations 8:3-4). This connection between the incense smoke and rising prayers is also seen in the petition: “Lord . . . give ear unto my voice . . . Let my prayer be set forth before thee as incense [and the lifting up of my hands as the evening sacrifice.]” (Psalm 141:1-2). Hence the altar of incense, which stood before the veil, was an altar of prayer. ((Matthew B. Brown, The Gate of Heaven, 72.))

Brown continues to note that the type of incense used on the altar was also symbolic, making this sacred space a “fragrant and purified atmosphere similar to that enjoyed by Jehovah in heaven” ((ibid., 72-73.)).  In other words, incense burning would make the holy place welcome for Jehovah to visit and make his divine presence known.

Another reference to this symbolism is seen in Revelations 5:8, where incense itself is viewed as prayers:

And when he had taken the book, the four beasts and four and twenty elders fell down before the Lamb, having every one of them harps, and golden vials full of odours [Greek incense], which are the prayers of saints. (Rev. 5:8)

Certainly such prayers were offered around the altar of incense, and before the veil in the holy place, further reinforcing the symbolism between incense and prayer.

An interesting note on Wikipedia states the timing of the incense offering among the temple rites:

The incense itself has many interesting connections with different religious practices and beliefs, which we will examine in a future post, but one note is that it is a “common motif . . . as a form of sacrificial offering to a deity” ((Wikipedia, “Incense,” http://en.wikipedia.org/wiki/Incense.)).