But even so, the fragments of the ordinances that are extant in artifacts and texts are very educational.  In Hugh Nibley’s classic work The Message of the Joseph Smith Papyri: An Egyptian Endowment he says:

But what about the Egyptian rites? What are they to us? They are a parody, an imitation, but as such not to be despised. For all the great age and consistency of their rites and teachings, which certainly command respect, the Egyptians did not have the real thing, and they knew it…. If the Egyptian endowment was but an imitation, it was still a good one, and we may be able to learn much from it, just as we may learn much about the early church from the vagaries of the Gnostics. But it is not for a moment to be equated with the true and celestial order of things….

What these few bits of added information do is to supply a new dimension to the experience, along with the assurance that a wealth of newly found records confirms the fundamental thesis of its antiquity and genuineness. ((Hugh Nibley, The Message of the Joseph Smith Papyri: An Egyptian Endowment, 2nd ed., xxvii-xxix.))

I’m particularly impressed with the latter statement, that the newest scholarship in Egyptology is very educative-apologetic in nature to the LDS Church, even without realizing so, demonstrating in clear terms that the elements of the LDS temple practice today are of very ancient character, and wholly unsuited to have arisen in Joseph Smith’s time and environment.  The more we learn about what the Egyptians were up to, as well as many other ancient civilizations, the more they fit squarely into Joseph’s model of the eternal order.  What is even more astounding is that none of these findings or scholarship were available to Joseph in his day, but have just recently come to light in the last few decades.  How Joseph knew, in the early 19th century, the deeper meanings of certain Egyptian hieroglyphics and themes has yet to be explained by our critics.  The Latter-day Saints believe Joseph was inspired by God, and that he restored an ancient order that has existed from the eternities.

The first time I heard about the Egyptian ankh symbol was in a recent KSL news radio interview with Andrew Skinner, current Executive Director of the Neal A. Maxwell Institute for Religious Scholarship at BYU, on his latest book Temple Worship.  In describing some of the circumstances that came together to prompt the writing of the book he said:

We just returned from Egypt, and once again, I was struck, and I think those that I traveled with were struck, by how the ancient Egyptians were consumed with the concept of eternal life and how they built their temples in order to secure that for their citizens and the inhabitants of ancient Egypt, and the idea that we can live life forever with the gods and that one of the purposes of this life is to actually become like God.  When ancient Egyptians died, they took as part of their name the name of the god Osiris, who was the god of resurrection, and that even, actually, is embraced by some of us today.  We occasionally see people who wear around their neck or on bracelets a charm, that is the ankh, which is the ancient Egyptian hieroglyph that literally translates as “eternal life” or “everlasting life.” ((Interview with Andrew Skinner, KSL News Radio, February 24, 2008.  Listen here.))

I thought this was interesting, so I did a bit more research.  What I found was that there are many explanations for the ankh symbol, some of which are very insightful to latter-day saints, but for which there is not a consensus among Egyptologists (this goes for many hieroglyphics).  One this is sure, however, and that is that the ankh is one of the best-known Egyptian symbols – it is found everywhere in sacred Egyptian artifacts and texts.  Indeed, it is also found prominently on facsimiles 2 and 3 of the Book of Abraham.

This table summarizes all the different possible explanations for the Egyptian ankh that I have been able to find:  ((Ask me for sources.)) 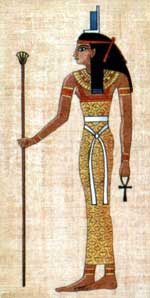 One of the more interesting possible origins for the symbol is a knot in the ceremonial girdle, also known as the “magic knot.”  The reason for this is its similarity to the tyet symbol, also called the “knot of Isis,” the “buckle of Isis,” or the “girdle of Isis.”  Wikipedia notes:

It seems to be called “the Knot of Isis” because it resembles a knot used to secure the garments that the Egyptian gods wore. ((http://en.wikipedia.org/wiki/Knot_of_Isis. See also this drawing of an Egyptian figure with a girdle and knot.))

The tyet symbol looks very similar to the ankh, the difference being the “arms” curve down:

This view is further substantiated given that the earliest or most archaic examples of the ankh show the lower section split into two parts – the ends of a bow. ((http://kaykeys.net/spirit/egypt/keysymbols.html. http://www.egyptianmyths.net/ankh.htm))  Carol Andrews tells us that “the most detailed examples [of the ankh] depict binding at the base of the loop” ((Carol Andrews, Amulets of Ancient Egypt, 86. See also the amulets in the shape of a compass and square. Link.)).  Such representations of the ankh can be seen in the center of this Relief of Thutmose I, in this particularly detailed relief, or in this engraving.

The ankh is often set in the same category as the Girdle of Isis, as a symbol of eternity. This is not because its straight lines may be lengthened in the imagination to infinity, but because they converge upon and meet in a closed loop. This loop symbolizes the inexhaustible essence of the life force identified with isis, from whom life flows in all its forms. It is therefore carried by all those who wish to share her life. Hence the ankh may be identified with the Tree of Life, with its trunk and foliage….

The significance of the Girdle of Isis is far more complex. Like ropework or plaited hair round the arms and the loop of the cross, it infuses the concept of life and of immortality with the concept of the knots which tie down mortal life on Earth and which must be unravelled to enjoy immortality. `Free your bonds,’ says The Egyptian Book of the Dead, `untie the knots of Nephthys.’ And again: `Shining are those who carry the girdle. Oh! Bearers of the Girdle.‘ The same meaning is conveyed by the Tibetan Buddhist book called The Book of the Untying of the Knots. While the plain looped cross symbolizes divine immortality, sought or attained, the Girdle of Isis makes clear the conditions under which that immortality is obtained – by the untying of knots – dénouement in the true sense of the word. ((A Dictionary of Symbols, Jean Chevalier and Alain Gheerbrant, translated from the French by John Buchan-Brown, Blackwell, 1994 (the French edition was originally published by Éditions Robert Laffront S.A. in 1969, 2nd ed. 1982).))

Champdor breaks down the parts of the symbol.  The ankh is

the symbol of the millions of years of the life to come. The loop is the perfect symbol of what has neither beginning nor end and stands for the soul which is eternal because it has sprung from the spiritual essence of the gods. The cross represents the state of trance in which the neophyte struggled, or, more precisely, the state of death, the crucifixion of the chosen victim, and in some temples the priests used to lay the neophyte on a bed shaped like the cross… The possessor of the geometric key to the hidden mysteries, of which the symbol was this very looped cross, was able to open the gates of the Kingdom of the Dead and penetrate the hidden meaning of eternal life. ((Champdor, 22.))

Another interesting and related explanation of the symbol is one given by Hugh Nibley:

… Alfred Wiedemann gives a possible clue when he points out that as soon as an Egyptian baby was born, the gods presented him first of all with the sign of “life” (the ankh) and “divine protection” (the s3), the former representing a knotted belly-band (Gürtelband), the latter a bound-up mat. Like the placenta (hn sw), which had to be preserved most carefully if one expected to be born again, this ankh-symbol was inseparable from a person throughout his lifetime and was always worn as an amulet. It was attached to or over the navel of both male and female babies as the sign of life. This would suggest that the mysterious ankh, by all accounts a knotted cord, was the navel string. It is interesting that ankh also means “oath,” the idea being, as Jan Bergman suggests, that one swears by one’s life, so that if the oath is broken, so likewise “the cord of life” – the umbilical cord – is broken. ((Hugh Nibley, The Message of the Joseph Smith Papyri: An Egyptian Endowment, 2nd ed., 454.))

What is even perhaps more interesting than what the symbol alone represented is how the Egyptians used this symbol in texts and drawings, and how it fit within their ritual worship.  This will be explored in the next installment.