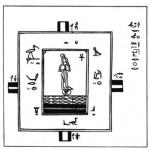 Hugh Nibley noted that the ankh symbol was also used to represent the gods or goddesses.  In describing the Egyptian House of Life he wrote:

The four houses that are the main part of the prehistoric cult-complex of Papyrus Salt 825 stand for Shu, Tefnut, Geb, and Nut—”that is to say, the four oldest gods, proceeding forth from the demiurge, who are here wind, fire, earth, and sky, the four elements of which life is comprised.” The four houses—with Osiris squarely in the middle of them, represented by the ankh-symbol—make up the House of Life, which seems to go back to an old tent or reed hut of purification. ((Hugh Nibley, The Message of the Joseph Smith Papyri: An Egyptian Endowment, 2nd ed., 227.))

Those that received the ankh were basically receiving the gods, and the rights, powers, and associations of the same:

There can be no doubt, Morenz insists, that the Osirianized dead receives the full status of godhood—indeed, that “to be divine (Göttlich-Sein) is the characteristic quality of the ba of the deceased.” Hence washing, anointing, censing, clothing, and nourishing are all rituals of deification, whether in the temple or the funerary services. The resurrection process is, in short, a deification process. ((Hugh Nibley, The Message of the Joseph Smith Papyri: An Egyptian Endowment, 2nd ed., 228.))

In the next part we will explore how the ankh was used in combination with other hieroglyphics, which gives us a glimpse of the substance of what was perhaps spoken by the god and the initiate as eternal life was bestowed.