This table summarizes the different possible explanations for these hieroglyphics that I have been able to find:

There are two typical combinations of the ankh with these figures: ankh, wedja, seneb and ankh, was, djed.

The Ancient Egyptian phrase ankh, wedja, seneb “life, prosperity, health” is a formula often suffixed to the names of ancient Egyptian kings–(the Pharaohs). It is frequently abbreviated in Egyptian–A.U.S. or a.u.s. with just three hieroglyphs (or with their equivalent forms in Demotic and Hieratic), making it possibly one of the oldest acronyms used in written language, although strictly speaking the first word ankh is not truly abbreviated.

That the pharaohs often included these symbols in their name is quickly evident from the popularized name Tutankhamun (Tut-ankh-amun), which means “living image of Amun.”  Amun (also spelled Amen) was the name of one of the Egyptian deities. ((Amen is also another name for Christ.  See Bible Dictionary.))

In other cases, the inclusion of the epithet “life! prosperity! health!” onto royal names was more thorough, as in this example: 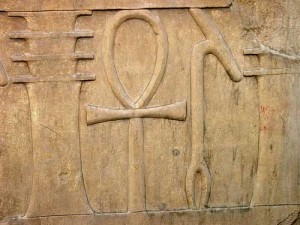 This combination of hieroglyphics was used by the Egyptian gods to bestow certain rights, powers, dominions, and eternal life upon the pharaohs and their queens ((cf. D&C 132:19.)).  Indeed, it was part of the concluding rites of the Egyptians that these words would be spoken to the king while in a “royal embrace” with the deity:

The words spoken are most commonly designated in the reliefs by three enigmatic symbols: the ankh, the was-scepter, and the djed-column . . . showing the three “‘virtues of the creative sun”: “life, power, stability.” ((Hugh Nibley, The Message of the Joseph Smith Papyri: An Egyptian Endowment, 2nd ed., 452.))

The word combinations have been found and translated in many variations.  Nibley gives us: ((ibid., 452-53.))

What is common to all the bestowal formulas is, surprisingly enough, not a spiritual endowment, as we would expect, or lofty, abstract, and mysterious phrases, but the simple declarative or optative sentence promising or endowing the initiate with the earthly gifts of physical strength and enduring vigor and posterity.  The words are not written out but are represented by the three symbols, which in this context may well have a special significance. ((ibid., 453.)) 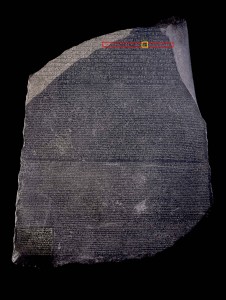 One particularly intriguing example of this pervasive formula is found, of all places, on the Rosetta Stone, one of the most prominent artifacts of Egyptian antiquity and was the very key to deciphering the hieroglyphics themselves.  Ironically, this passage from the Rosetta Stone is written in response to King Ptolemy V refurbishing, repairing, and restoring the temple to proper order and beauty:

As a reward for these things the gods and the goddesses have given unto him victory, and might [or power], and life [ankh], and strength [wedja], and health [seneb], and every good thing of every kind whatsoever and his great position [eternal rank or kingdom] is firmly established upon him and upon his children for ever [djet = all eternity]. ((E. A. Wallis Budge, The Rosetta Stone, 1989, 116.))

The three symbols of the ankh, djed and was were so often grouped, they sometimes became one and the same symbol, the ankh-djed-was scepter carried by the gods.  Ptah is usually shown carrying this all-inclusive scepter.

Dr. Nibley sums it up nicely:

Thus taken together, the three signs that appear in combination as the words of bestowal at the ritual embrace—’nh, dd, w3s—originally stood for the navel string [ankh], the backbone of Osiris [djed], and his priestly power [was], and with the accompanying inscriptions—which invariably promise health and strength to the candidate—bring to mind the verses of Proverbs 3:1-3, 8, strongly reminiscent of the Egyptian Wisdom literature, and opening with the typically Egyptian embrace of the Two Maats. . . .

The symbols are exchanged in the concluding rite of the mysteries as a means of identification—not as between members meeting in the street, but the means by which the initiate identified himself “as someone whose life had been united to that of the god” . . . ((Hugh Nibley, The Message of the Joseph Smith Papyri: An Egyptian Endowment, 2nd ed., 456-57.))

Next we will look to see if any of these temple-related symbols appear on our facsimiles of the Book of Abraham.