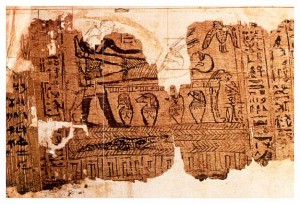 Let’s return again to the subject of the ankh, and related symbols, that we’ve briefly studied, and look to see if these symbols figure at all on the Joseph Smith Papyri.  As we’ve seen, these particular hieroglyphs have a strong connection to temple themes, being bestowed by the Egyptian gods in a manner reminiscent of the way eternal life is portrayed symbolically in the temple today.  But do these symbols appear on the papyri from which the Book of Abraham was translated, or in the facsimiles, and what does that mean?

Many in the Church probably do not know much about the Joseph Smith Papyri or the origins of the Book of Abraham.  And they don’t necessarily care to know.  What we know is usually limited to the few facts that the writings were translated from some papyri that Joseph had, which also came with some mummies from Egypt.  Beyond this, most other historical issues are beside the point of the actual text of the scripture, which we know is from God by the witness of the Holy Ghost.

But I believe having a deeper understanding and knowledge of the papyri illuminates the Book of Abraham in marvelous ways and is further evidence of the divine calling of the Prophet Joseph Smith, and the restoration of the temple rites in this dispensation.

But first, let’s cover some basics about the papyri’s relationship to the Book of Abraham.  The best introduction to the origins of this scripture can be found in John Gee’s excellent summary A Guide to the Joseph Smith Papyri.  It is only 70 pages long, and does an excellent job of briefly describing the history, controversies, and interpretations surrounding the papyri from which the Book of Abraham came forth.  Here are some points he makes:

The points that strike me most are that the papyri contained some of the writings of Joseph of Egypt too.  Unfortunately, Joseph Smith never translated these.

We also only have about one quarter of the text that Joseph Smith did translate of the Book of Abraham.  Can you imagine the scriptural treasure if our current Book of Abraham were four times longer? This would make the Book of Abraham closer to twenty chapters long instead of five.  Dr. John Gee believes that the text might have continued up until the sacrifice of Isaac. ((Olivewood Bookstore lecture, June 19, 2008.))

Because we don’t have most of the text of the Book of Abraham, we don’t have an explanation of how facsimiles 2 and 3 fit into the broader picture of Abraham, such as is given for facsimile 1 in Abraham 1.  The only description we have from Joseph Smith for the latter two facsimiles are an identification of the figures.

We also now know what the Egyptian text says on the other papyri fragments that were recovered, which gives some very interesting insight into our restored temple rites. ((See Hugh Nibley’s The Message of the Joseph Smith Papyri: An Egyptian Endowment.))

In the next part of my series on the ankh we will take a closer look at where these symbols appear in the papyri and facsimiles, and if they correspond whatsoever to Joseph Smith’s descriptions, something our critics vehemently deny.