Naturally, as part of these tours we were also able to learn much about the locations and people of the places we visited.  One of the places that really struck me for its beauty and uniqueness was New Zealand.  Going to New Zealand was like stepping into a different world.  The indigenous people of New Zealand are known as the Maori, and the customs and traditions of these people were quite different than what we were accustomed to.  Some of the things we experienced with the Maori were very spiritual in nature, which immediately caused me to ponder, and which I have had opportunity to think about for several years now.  Specifically, the Maori ceremonial greeting tradition that they conducted with our BYU group as we arrived in New Zealand was one of the most significant experiences I had with the group.  This rite or ceremony is known as the powhiri, and has insightful elements for Latter-day Saints to consider.

The Maori term itself means “normal,” “natural,” or “ordinary” in the Maori language, “meaning man, human being, as distinguished from spirit, or god, &c.” ((http://en.wikipedia.org/wiki/M%C4%81ori.  “What is a Tangata Maori?“)).  Where they live is commonly called te ao maori, meaning “this common, familiar world, where men live, as distinguished from the dwelling-place of the gods” ((ibid.)).  Thus, even this people’s self-identity and existence in this world takes into account the existence of a supreme being.

The Maori are said to have inhabited the Polynesian islands by way of the waka, or ship vessels, which are like giant ocean-going canoes.  They say that the “waka was our only means of going from A to B… Without waka the Maori certainly wouldn’t be here… Our ancestors were truly dependent on waka to get here” ((Kawa.  See also waka, and Maori migration canoes.)).  This migration is said to have occurred sometime between 800 and 1300 AD ((http://en.wikipedia.org/wiki/Maori)).  Ancient populations migrating by boat to different continents and islands is interesting to the Latter-day Saint because of our own narrative of Book of Mormon people doing the same.

The powhiri is a welcome ceremony and ritual which the Maori perform in order to greet visitors to their land ((http://en.wikipedia.org/wiki/Powhiri)).  There is a great documentary at NewZealand.com which explains this ceremony with multimedia.  It is described as the “embodiment of [Maori] spiritual and cultural being” ((Powhiri)).  This tradition is said to be very ancient, and has been passed down from Maori tribal ancestors.  Some of the purposes of the ceremony are “to ward off evil spirits and unite both visitor and host in an environment of friendship and peace” ((ibid.)).  In this sense, it is a type of at-one-ment of strangers, bringing both into desirable harmony and unity with each other.  It is an initiation of sorts to become one and a part of the tangata whenua, or Maori people.

The term powhiri has been etymologically analyzed by Maori in order to describe what it means.  There are two parts to the word – po and whiri.  Po is described as “a venture into the ‘unknown’ or a new experience,” while whiri comes to mean “the act or experience of exchanging information and knowledge” ((ibid.)).  And so the combined term could be interpreted as meaning a kind of mystical or novel act in which one gains and/or exchanges knowledge, not unlike the way we describe our temple experience. 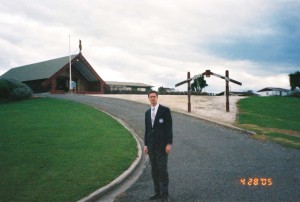 Me standing in front of the marae where our BYU group experienced the powhiri ceremony. (click for a larger view)

The powhiri ceremony most often occurs in a marae, or the gathering place of the Maori, where “the past meets the present” ((Kawa)).  There are typically several parts to a powhiri:

Our BYU group experienced all of this ceremony among the Maori soon after our arrival in the country.  It was a wonderful experience.  The hongi was a particularly moving and beautiful experience, as each of us pressed our noses and foreheads with each of our Maori hosts in the marae, and shared the breath of life with each.  It was a very sacred yet friendly moment of becoming acquainted with our new friends, being welcome in their country, and becoming part of their family.

There is YouTube example of a powhiri at the 2008 Parahaka Peace Festival.  The exchange of the hongi embrace begins at about 7:00 into the clip.  The taki can also be seen in this clip from Queenstown, New Zealand.

We participated in at least two powhiri while we were in New Zealand.  Little did we know the significance of what we were doing at the time.  But we grew into the culture throughout our visit, and were eventually fully participating with the Maori even in the haka dances.  I would love to do a more in-depth study of the powhiri ceremony and the spiritual traditions of the Maori at some point.  It is a fascinating culture, and we can learn much from them.