My mind returns again to posts I’ve written in the past about subjects that do not cease to fascinate me.  Today I was reminded of a post in 2009, The Traditional Greek Folk Dances and their Ancient Roots.  The Greek dances are some of the most ancient dances in the world, and have been passed down by tradition to the present day where they maintain many of their archaic forms.

One of the most ancient references to dance is contained in one of the oldest extant works of Western literature, Homer’s The Iliad, where the poem describes a dance of Greek youth “with their hands on one another’s wrists,” wearing “robes of light linen,” “crowned with garlands,” and “danc[ing] deftly in a ring.”  Those of you who have witnessed or participated in Greek style dances will recall this stylized form of joined hands, weaving lines, winding, unwinding, circular rotations facing inward and so forth. Below is a video of a traditional Greek dance where you can see some of these elements: (more after the video)

Often the dances included antiphonal singing, which means a leader sang a statement, and the rest of the group responded or repeated it.  Indeed, this may be the source of the common verse and chorus structures in modern day music.

Perhaps one of the most interesting aspects of the Greek dances are the costumes worn.  Below are photos of the most basic form of traditional Greek dance costumes as they are worn in modern times.

San Joaquin Delta College Hellenic Dancers doing the Greek Syrtos dance at the school’s new campus dedication in 1977. A musician is playing a Thracian gaida in the center of the ring. Used by permission. 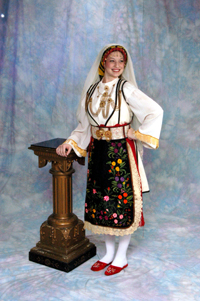 Oddly, one of the costume elements is an apron.  Aprons are typically a garment worn to protect one’s clothing, so why would these dancers wear aprons?  Some reasons include:

Moreover, the embroidered designs of these Greek aprons usually are of a floral nature, with stylized vegetation, primarily because many are symbolic of the Tree of Life.

Please see my original post about the Traditional Greek Folk Dances for many more details.

See also my paper on The Genesis of the Round Dance, published in BYU’s annual Dance Department Writer’s Symposium journal, now available at BYU’s Harold B. Lee Library.