My mind returns again to posts I’ve written in the past about subjects that do not cease to fascinate me.  Today I was reminded of a post in 2009, The Traditional Greek Folk Dances and their Ancient Roots.  The Greek dances are some of the most ancient dances in the world, and have been passed down by tradition to the present day where they maintain many of their archaic forms.   END_OF_DOCUMENT_TOKEN_TO_BE_REPLACED 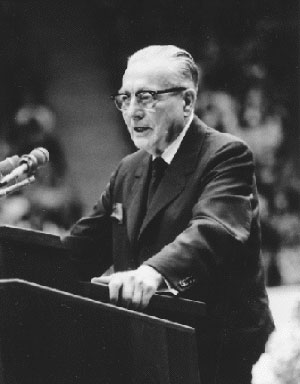 [Update/Disclaimer (8/1/08 8:10pm MDT):  Because of the different use of the term “liberal” that President Lee uses in this talk, in contrast to the common modern political usage, care should be taken when reading it.  President Lee’s use of “liberal” was strictly used in the sense of a standard of living the gospel, and is therefore applicable to all members regardless of political affiliations.  I personally found much good counsel for myself in the prophet’s words.]

A couple days ago, Tim Malone from the excellent blog Latter-day Commentary pointed me in the direction of a talk in 1971 by President Harold B. Lee on the subject of religious liberalism.  Last night, by random coincidence, as I made a passing remark to my father about some members in the Church who claim it improper to use the terms “the only true Church,” he immediately referred to a quote in the same talk.  Something is telling me to pay close attention to the words of President Lee.  My hope is that all the Saints would too.  This man was a living prophet of the living God:

I sincerely pray for the spirit of this great conference during the few moments that I shall stand here.

Sometime ago there appeared in the Wall Street Journal a thought-provoking article, written by an eminent theologian at the Columbia University, under the subject heading “An Antidote for Aimlessness,” which you recognize as a condition that is prevalent in the world today. I quote from this article by Rabbi Arthur Herlzterg:

“What people come to religion for, is an ultimate metaphysical hunger, and when that hunger is not satisfied, religion declines … the moment that clerics become more worldly, the world goes to hades the faster.  END_OF_DOCUMENT_TOKEN_TO_BE_REPLACED