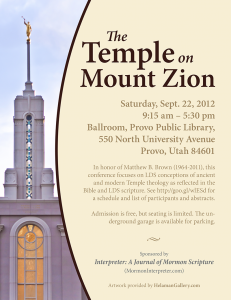 Flyer for “The Temple on Mount Zion” Conference

The Interpreter Foundation is sponsoring “The Temple on Mount Zion” Conference coming up later this month on September 22, 2012, and which will take place at the Provo Public Library, in Provo, Utah.  To spread the word about this conference, there is a flyer now available to download, print, share, email, and post online.  I think this conference will be excellent, and I recommend that you take a moment now to post this flyer wherever you can to help others learn about it.

END_OF_DOCUMENT_TOKEN_TO_BE_REPLACED

If you liked reading the original FARMS, join our new support organization, Restore FARMS, to help see it restored to its original mission. You can also like our Facebook Page to stay updated.

There are many people who are disappointed with the events of the past week at the Maxwell Institute at BYU.  Indeed, it appears as if the original mission and purpose of the FARMS organization has now been completely lost, with the dismissal of Daniel C. Peterson as Editor of the Mormon Studies Review (formerly the FARMS Review), and his team of associate editors.  In a comment today on David Bohn’s blog post at Times & Seasons, Dr. Peterson noted:

I have solid and direct reason to believe that the new direction being charted by the Institute omits anything that most Latter-day Saints would recognize as apologetics… And, at a very minimum, there is the incontrovertible fact that the Review, which has long represented the Institute’s apologetic aspect at its most explicit, has been put on indefinite hiatus. Given that the Institute’s publication of books has dwindled to virtually nothing, it’s difficult to see exactly where the “new course’s” apologetics efforts are going to appear, now that the Review is gone.

This concerns us deeply. FARMS has represented a highly respected and influential group of scholars whose ultimate goal was the defense of the Church from its critics, and sustaining the faith of Church members through education. The fact that this now appears to be “gone” swings the door wide open to an onslaught of unanswered criticism of the Church, and members with little recourse. The organization Foundation for Apologetic Information and Research (FAIR), and Scholarly & Historical Information Exchange for Latter-day Saints (SHIELDS), are still excellent resources (indeed, they are the only ones left), but the loss of FARMS will leave a gaping hole in our efforts to defend the Church’s doctrines, history, and scriptures through a scholarly approach to research and publications.

A quote often associated with Edmund Burke says, “The only thing necessary for the triumph of evil is for good men to do nothing.”  This mirrors a revelation given by the Lord through Joseph Smith the Prophet, now found in Doctrine and Covenants 58:27, which states, “Verily I say, men should be anxiously engaged in a good cause, and do many things of their own free will, and bring to pass much righteousness.” Instead of sit around and do nothing, some of us have decided to do something, to engage ourselves of our own free will, and do what we can do, now, to gather the supporters of FARMS under the same roof, and establish a cause, to help support the future of this great organization.

Tevya Washburn, founder of MormonLifeHacker.com, and I have decided to join together to organize Restore FARMS, a support organization with the goal of restoring FARMS to its original mission and purpose.  We don’t know exactly what that means for FARMS and its scholars.  Will it once again regroup as an independent organization?  Will it be given its own place again at BYU, with a board of directors consisting of FARMS scholars who share in its vision?  Will it join with FAIR in a joint apologetics mission?  We don’t know.  What we do know is that we do not want to see FARMS just disappear.  And we want your input! The Church needs, as it always has, defenders who are willing to address the many criticisms leveled at it by its detractors, and to help members who are struggling in their faith because of such material.

We have organized a website at RestoreFARMS.com, as well as a Facebook Page. If you want to join with us in rallying supporters for traditional FARMS, please visit Restore FARMS, and also click the “like” button below for our Facebook Page. You can also click “Send” to send this message to your friends, family, or groups on Facebook or by email address:

Note: This is a grassroots effort, without any direct affiliation with BYU, the Maxwell Institute, FARMS, FARMS scholars, or the Church. We, the readers, supporters, and donors of FARMS want to organize together, and help continue what was started 33 years ago. There is strength in numbers. Help us restore FARMS to its former stature as a scholarly apologetics organization which sustains and defends The Church of Jesus Christ of Latter-day Saints through ongoing informative publications.

I have posted links to TempleStudy.com articles on my personal Twitter and Facebook accounts for a long time, but I thought it was about time to make their own official accounts.  Now, if you just want updates about TempleStudy.com and not from me, or vice versa, or want to filter your social network notifications in some other way, you can do that.  Here are the official account links:

Now you don’t need to be updated about my frequent 5K runs anymore, if you don’t want to (I’m training for a half marathon in June).  But if you are interested in my personal activities, you might like to know that I just finished version 1.0 of BryceHaymond.com, my design consultancy business I call Blackpool Design.  As I mentioned a couple weeks ago, I’m out of full-time work, and I’m looking for clients who need freelance design, whether product design, graphic design, or web design.  If you know of someone who is looking for design, I’d be very grateful for your referral.

Once I get my house in order a bit more, I’d really like to get back to studying the temple, and sharing with you what I learn.  This is truly an inexhaustible subject.

My brother and I are pleased to announce the launch of our latest project—the FollowTheProphet.net website!  This new website has been in design and development for the past month, and we are happy to finally be able to announce today that it is available.

FollowTheProphet.net helps to fill that gap of knowledge.  With advances in search technology, we are able to aggregate all public information we find about where the prophet is, what he is doing, saying, teaching, visiting, etc., and post it all in one central place at FollowTheProphet.net.  Any talks or speeches he gives, we will post links to his words.  Any trips he goes on, we will post information about his visits.  Any temples he dedicates, we will inform you about the events.  Hopefully this will help you feel a closer connection with God’s living prophet, and stay up-to-date about his activities and his counsel.  We believe that in these turbulent times, we will be safe if we stay close to the living prophet of God and heed his word.

We are excited to bring you this new service, and hope you will enjoy it!  Please give us any tips, suggestions, or feedback that you may have that would help us improve the site.