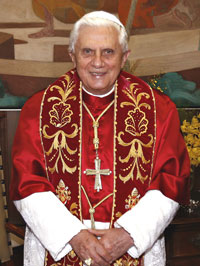 There is an established practice throughout history and in many areas of the world when someone is elevated to royal, or otherwise elevated status and position — they are given a new name. This name is often referred to as a regnal name, or a reign name, and is different than the given name at birth. This practice is particularly well known in the Roman Catholic Church, where the Pope, upon being elected to his position, is called upon to give himself a new name. This process goes something like this: END_OF_DOCUMENT_TOKEN_TO_BE_REPLACED

Since the first day I picked up a book by Hugh Nibley I have been fascinated by the parallels which he taught exist between our practices and those of the ancients.  Many critics of the Church claim that Joseph Smith made this all up, that he was a charlatan, a deceiver, and a con-man.  However, making that broad claim that Joseph invented it all from his fantastic mind (for even our critics offer him that), or that he plundered the practices from others, still fails to explain why parts and pieces of the gospel structure are to be found scattered around all the world in almost every time, place, and culture.

But what good does it do us in studying the ancient practices?  Why is it so interesting and pertinent to our modern-day Church?  Why does looking back help us look forward?  Nibley gave a good explanation:

Latter-day Saints believe that their temple ordinances are as old as the human race and represent a primordial revealed religion that has passed through alternate phases of apostasy and restoration which have left the world littered with the scattered fragments of the original structure, some more and some less recognizable, but all badly damaged and out of proper context. . . .

Among the customs and religions of mankind there are countless parallels, many of them very instructive, to what the Mormons do. . . . But what about the Egyptian rites? What are they to us? They are a parody, an imitation, but, as such, not to be despised. For all the great age and consistency of their rites and teachings, which certainly command respect, the Egyptians did not have the real thing, and they knew it. . . . in the words of Abraham, “Pharaoh, being a righteous man,” was ever “seeking earnestly to imitate that order established by the fathers in the first generations, in the days of the first patriarchal reign” (Abraham 1:26), for he “would fain claim [the priesthood]” (Abraham 1:27). If the Egyptian endowment was but an imitation, it was still a good one, and we may be able to learn much from it, just as we may learn much about the early church from the vagaries of the gnostics. But it is not for a moment to be equated with the true and celestial order of things. . . . What these few bits of added information do is to supply a new dimension to . . . [our temple] experience, along with the assurance that a wealth of newly found records confirms the fundamental thesis of its antiquity and genuineness. (Hugh Nibley, The Message of the Joseph Smith Papyri, xxvii-xxix)